Well let’s start off this week with a really weird episode. It was always one that I kind of skipped by as a kid, because it just didn’t work for me, and I’ve actually seen a lot of hate for it online. People tend to think it’s too dark, and Bart is out of character. I don’t know if I totally agree with that, but let’s check it out!

And the episode starts off with one of my favorite types of openings, Eye on Springfield! We get to see Kent Brockman tease us with a two-story outhouse, a nurse that’s trying to use humor to disastrous results, and finally that the city is getting ready to revitalize their old waterfront district. Springfield apparently used to have a booming squid industry, but that’s dried up, and they’ve decided to make a fancy outdoor mall out of the old Squidport. And they’re also having a black tie gala to celebrate the opening, which Marge super wants to go to.

But that’s not going to be the main story, so we head upstairs to see Lisa and Janey sitting around talking about these insane novels called the Babysitter Twins, and how they totally want to be babysitters, even though they’re only 8. Which is weird, since to be honest, babysitting kind of sucks, especially kids that aren’t related to you. Anyway, Lisa actually decides to go through with this plan, and even starts advertising at the Church, hoping to drum up some business. And she finally gets her first gig when Ned comes over, desperate for the Simpsons to babysit Rod and Todd, because he has to go to Capitol City to fill out some paperwork since Maude and her mother apparently got arrested in the Holy Land. Homer blows him off, claiming he’s busy getting Marge freed from the Holy Land, but Lisa ends up picking up the slack and babysitting the weird ass Flanders kids. And boy are they weird. They aren’t allowed to use dice and are scared of moths. But Lisa did a great job, and Ned is super impressed, promising to recommend her to everyone.

And apparently a recommendation from Ned Flanders is really important, because Lisa starts raking it in. She babysits for the Hibberts, and the Wiggums, which must be super weird since Ralph and Lisa are the same age…and dated? Whatever, we finally get some conflict when Bart starts to get jealous that she’s making money. And if there’s anything we’ve learned from the Simpsons, it’s that a jealous sibling is a terrible thing. And things escalate further when that fancy gala arrives, and Homer and Marge prepare to head out while dressed in fancy clothes. But before they leave they drop the bomb that Lisa is going to be in charge, and babysitting Bart, which is a terrible plan. It’s also wonderful that Bart knows he’s exactly “two years and thirty eight days” older than Lisa, which is one of the most sibling things they’ve ever done. But Marge and Homer head out, and Lisa gets ready for the most difficult night of her life.

Homer and Marge head to the Squidport, and decide to park right in the middle of the boardwalk before exploring all the trendy and oddly specialized stores that have opened. There’s also a hilarious part where Moe has a storefront in the Squidport that is just a long tunnel that leads all the way back to his real bar, which is hilarious. But the Squidport stuff isn’t that interesting, let’s get back to the disaster on Evergreen Terrace. Things start right away when Bart gives Lisa shit about their dinner, and yells about wanting to just eat ice cream. And all of his fussing ends up getting Maggie upset, who starts crying. And in the first example of Bart’s evil genius, he decides to calm Maggie down by feeding her coffee ice cream, which immediately gets her buzzing. But Bart has a lot more damage to do.

While Lisa is trying to put Maggie down for the night, to little success, Bart is busy making all sorts of insane calls, ordering up some pranks for Lisa. And after Lisa tries to drag Bart up to his bed for sleep, since he’s using non-violent protest, the deliveries start showing up. We get a giant submarine sandwich that’s “swimming” in vinegar, Krusty whose there for a bachelor party, paramedics who are there for an emergency sisterectomy, some Government guys who are going to drug Lisa because she saw a UFO, and a chauffeur for the ambassador from Ghana. Which all boils up to an explosive outburst by Lisa, who kicks everyone out, and starts yelling at Bart to go to bed. He then does the stupidest thing of the episode, where he starts eating bread, claiming that he can’t tell the difference between bread and bed. And his shittiness reaches its apex when he goes upstairs and starts jumping on Homer and Marge’s bed, claiming he’s not going to sleep. Lisa finally snaps and starts chasing him around, until he falls down the stairs, dislocating his elbow.

Lisa and Maggie go down to help Bart, who isn’t even close to being done being as asshole. He decides he’s going to keep his dislocated elbow, and make his forehead bump larger to use as proof of Lisa’s negligence. So he runs up to his room and starts bashing his head against the wall, until he ends up passing out. Lisa decides to call 911 and get an ambulance, but they refuse to come since Bart called them for the sisterectomy, a leprechaun bite, and a severe case of butt-rot. So she starts flipping through the yellow pages, thinking about calling Dr. Hibbert, until she starts worrying that he’ll lose faith in her and stop using her as a babysitter. So instead she finds an ad for Dr. Nick, and decides that’s a much better call. She drags Bart down into a wheelbarrow to get him to Dr. Nick, and ends up sticking Maggie in a cat-carrier to keep her calm. And the siblings head out into the night!

They get through the bad part of town and end up at Dr. Nick’s which is unfortunately packed. She tries to get Mr. Smithers to let them cut in line, but I think they’re implying he has something in his butt, and he refuses. They also learn that there was a separate wheelbarrow line that they cut, and don’t have time to wait for Comic Book Guy, and his cheeseburger induced coma. So the wheelbarrow train heads off to the hospital. Unfortunately they get stopped by Chief Wiggum, who just wants to chat about wheelbarrows with Lisa. And by the time he finally leaves, Lisa comes back and finds that Bart has fallen out of the wheelbarrow, and slid down a giant hill into a big mud-pit. Lisa heads down to save him, only to find that the mud-pit he landed in is right next to the Squidport. Right as Mayor Quimby is giving a speech. So the entire town turns around to see Lisa, and everyone freaks out. Everyone is ashamed of Lisa, and Dr. Hibbert even says Bart was hurt because of bad babysitting. Which surly has destroyed her job. But we cut to a couple days later, where Bart actually apologizes for being a monster, and Lisa resigns herself to a life without babysitting. That is until everyone starts calling again, because no one cares about Lisa being negligent to Bart.

This was a strange episode. The central premise is completely ridiculous, which isn’t a bad thing for Simpsons, I mean they literally had an episode where Homer worked for a Bond villain. I think it’s because there’s a level of realism to this episode that ones that get cartoony don’t have. This is a grounded episode, besides the ludicrous idea that parents would let a younger sibling be in charge of an older one, not realizing that that could lead to disastrous results. There’s also the fact that Bart is completely out of character and being completely horrible in this episode. We’re used to Bart being a shit in this show, but he takes it to a whole new level in this episode. He’s awful to Lisa in this one, for way less of a reason. But honestly, I think my biggest problem with this episode is that it’s a similar idea that’s been done better. The central conflict in this episode is basically the same as “Summer of 4 ft 2,” where Lisa starts doing something out of character, Bart gets jealous, Bart does something horrible to her, she gets upset, Bart apologizes. It’s the same basic structure, but Bart comes off way worse, and in the end you almost kind of agree with him. Lisa is way too young to be babysitting anyone, let alone her older brother, and she does mess up and makes the worst possible decisions when she does. Lisa was way over her head in this story. Not that I agree with Bart in this, he’s awful, but I also don’t agree with Lisa in this one. There’s really no one to root for in this episode, because everyone is acting out of character. Bart isn’t this awful and Lisa isn’t this irresponsible.

Take Away: Don’t let and eight year old be a babysitter. And “Cheeseburgers and loneliness are a dangerous mix.”

“My Sister, My Sitter” was written by Dan Greaney and directed by Jim Reardon, 1997. 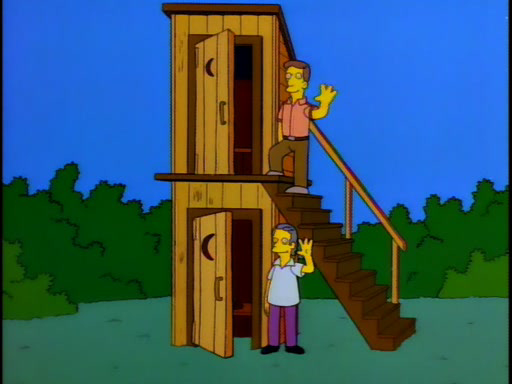 Tagged as: Lifetime of Simpsons, My Sister My Sitter, Season 8, the Simpsons