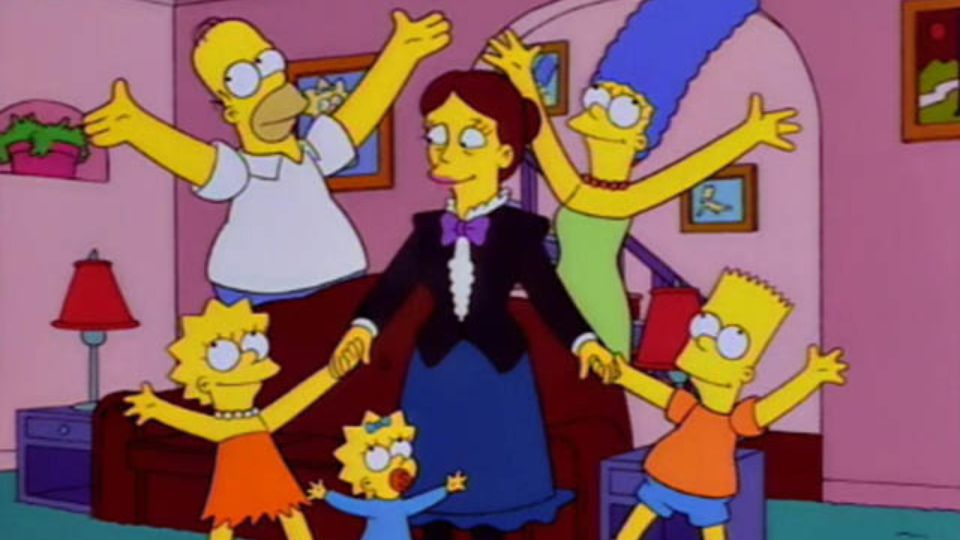 Well how do you top an episode about Homer and Mr. Burns being trapped together inside a cabin slowly going mad? Throwing in a magic, song-singing British nanny who flies around with an umbrella and in no way resembles a trademarked and beloved character. And boy is it great. Especially when you realize that this episode is full of great songs, and man were the Simpsons great at making hilarious music at this point in the run.

And we start off with the ridiculous joke of Krusty having a live show at the Apollo Theater that he’s calling the Krusty Komedy Klassic, which results in Krusty attempting to do terrible sketch-comedy at one of the most iconic black venues with a giant KKK sign behind me. And things don’t go well for him. And it doesn’t go well for the Simpsons either, who are desperate to change the channel, not realizing that Grandpa stole their remote thinking it was the phone. And at that point, just like any episode that revolves around Marge, the family starts to treat her like crap. They make her get up to change the channel, and go grab things for them in the kitchen, just treating her like a servant. And as we see Krusty mock Gerald Ford and his love for the Boy Scouts we see the plot of the episode start going when Lisa finds a giant blue hair in her soup, causing Marge to panic.

Turns out Marge’s hair is starting to fall out, and at a rapid pace as we see in a wonderful montage of her classic hairdo gradually falling apart while a song from “Hair” plays. And it culminates when she and Homer are in bed and she finally reveals that something is wrong, as she takes off the giant shawl she was covering her hair with, showing Homer that there’s huge patches missing from her beehive. So Marge goes to Dr. Hibbert to get checked out, since Hibbert doesn’t have a specialty and is amazing at everything, but he’s pretty baffled at what could be causing this aggressive hair loss. That is until Marge gets a call from Bart and Lisa, who are both asking her to bring them milk, which causes some more hair to fall out. And this is evidence enough to have Hibbert diagnose it as a stress issue.

And the only possible way to alleviate her stress is to hire a nanny to help out with the household chores and try to make the family not be terrible to her. And they’re able to pull that off financially by having Homer quit the Civil War Reenactment club that we all know he loves. Although that does lead to a great scene where we see that Apu is the group’s Stonewall Jackson. So they start interviewing nannies, but it becomes a bit of a problem when Homer is convinced they’re all pulling a Mrs. Doubtfire, causing him to attempt to rip all their wigs off. And since the best candidate they came across was Kearney, they start to get a little defeated.

Marge and Homer get disheartened, not sure how to go forward in their nanny hunt, when Bart and Lisa show up to sing a great song about what the perfect nanny for them would be. We also get the amazing moment when we see what’s going on inside Homer’s head when he says they have his undivided attention, and it’s just an old timey black and white cartoon with barnyard animals dancing to “Turkey in the Straw.” Bart and Lisa’s song lists all their weird qualifications, and right on cue Shary Bobbins comes flying down from heaven with her umbrella to apply for the job.

They interview Shary and find that she’s perfect in every way, just like Homer, and she even nails Bart’s weird hypothetical question about finding him reading a Playdude. So they hire her and right away she gets to work and takes the kids upstairs to clean as Homer and Marge marvel about her butt waxing the banister. So Shary Bobbins teaches them their first lesson and sings a great song about how great it is to half-ass everything and do a bad job cleaning as they just push all of Bart’s crap into the closet and under the bed. Since cutting corners is the American way. And immediately things transport back to the 1800s while Shary brings the kids to a park where see Principal Skinner selling Jimbo. They also run into Willie, who’s playing a one-man-band like Dick Van Dyke, and who was apparently engaged to Shary back in England before her eyesight came back.

And slowly but surely the family starts to get better and become decent human beings, all thanks to Shary and her magical powers. And with her work done, Shary decides that it’s time for her leave and find another family to take care of. Unfortunately as soon as she steps food outside the house the family falls apart and becomes even more horrible than they were before she got there. So good news, Shary is trapped there! And the weird thing is the family start being horrible to Shary now. They openly mock her, act horrible, and don’t even let her sing. We then see a couple scenes of the family being horrible to Shary while we see two great TV gags, like Charles Bronson being on Andy Griffith and killing people, and Quentin Tarantino showing up on Itchy and Scratchy before getting killed. And in the end Shary is left a horrible drunken wreck, singing Jimmy Buffet while getting smashed with Barney. So the family finally take pity on the poor woman and set her free while singing a great song about how they’re happy being terrible people. And with her final thought of “don’t think its sour grapes, but you’re all a bunch of apes” she grabs her umbrella and flies off as the family smiles, content in being terrible people. And on one final bit of spite, we see Shary get sucked into a plane’s engines. 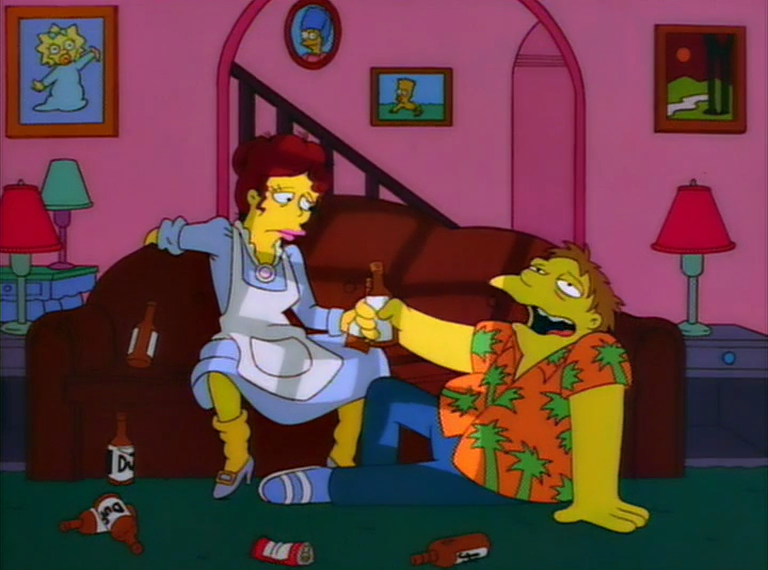 What a ridiculous episode. The beginning was structured just like a typical Marge episode, with the family being uncharacteristically horrible toward her, but then instead of her learning to relax and take it easy things took a hard left turn by suddenly becoming a Mary Poppins parody. And it was a pretty great parody. The songs are all wonderful and some of the funniest songs that were ever written for the show, and you should listen to them all. Plus the part of the episode where it suddenly becomes the 1800’s as they wander the park and everyone knows Shary is pretty fantastic. But the real key to the episode was the third act, which kills me every time. Seeing them all be super horrible to Shary was really funny to me, and that final song with them all being completely resigned with what bad people they are was pretty damned fantastic.

Take Away: Half-assing things is the American way.

“Simpsoncalifragilisticexpiala(Annoyed Grunt)cious” was written by Al Jean and Mike Reiss and directed by Chuck Sheetz, 1997. 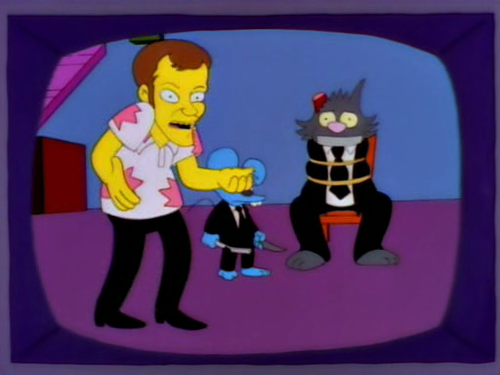