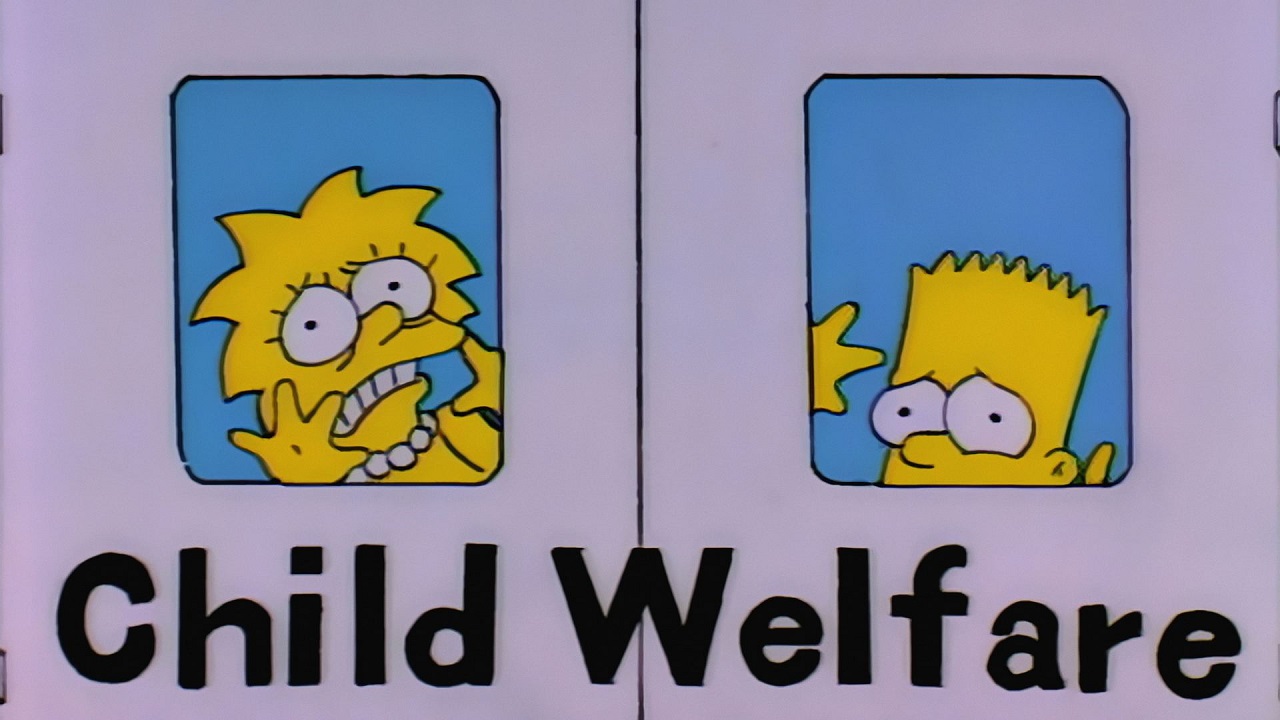 Huh. Well this is a weird one. It’s not that I forgot about this one, I just feel like I haven’t seen it in ages and forgot just how strange this episode is. Let’s dive on into this bizarre story!

We start off by seeing just how into a routine Marge is. Her morning duties are practically muscle memory at this point and she multi-tasking like crazy to get Homer and the kids ready for the day. She makes their breakfasts, lunches, and takes care of Maggie, all before they get down to the table. Marge has also gotten some old newspapers from the dump for Lisa, taken a piece of paper with “I’m a Stupid Baby,” written on it off Lisa’s back, and stops Bart from wearing plastic vampire fangs to his school picture day. But when the kids are sent off to school, Homer reveals that he has a different plan for the day, and is apparently going to play hooky from work and take Marge to some fancy spa, because he’s obtained some free passes. He basically pretended to buy a fancy car, and then just stole the tickets, but hey, it’s the thought that counts. Marge is initially against the idea, since the house is a mess and she says she has a lot to do, but Homer gets Grandpa to watch Maggie and convinced her she needs a day of, so they head to the spa!

But we quickly see that this was a bad day to bail, because things start happening to Bart and Lisa pretty quickly. Bart’s class is getting ready for their class-photo, and Mrs. Krabappel is shocked to see that Bart has picked up head lice. We see that he got it from a monkey Milhouse found in a wicker basket, but Bart apparently doesn’t tell anyone that, and they assume he got it from home. Principal Skinner and Willie burn Bart’s clothes and give him a burlap sack to wear, and decide they need to check on Lisa too. And at this point in the day Lisa is getting picked on by some other girls, who have stolen her shoes, making her walk through the mud to get to Skinner. And as she walks away she gets cracked in the head by a volleyball, messing up one of her teeth. So Lisa shows up, looking even worse than Bart, and Skinner gets alarmed enough to call Child Protective Services.

So while Marge and Homer are enjoying the spa and fending off creepy Mafia guys in the sauna, Child Services have shown up at their house to investigate. They find the house a wreck, Grandpa asleep and confused, and Maggie drinking from the dog bowl with the “Stupid Baby,” page stuck to her. So the Service people stay at the house until Bart and Lisa show up, confused that Marge and Homer aren’t there either. And when they finally do get home, the Child Services people are not pleased. They rattle off a list of things that were wrong with the Simpson home, including putting the toilet paper in the wrong direction, which I think about every time I put new toilet paper in. And at the end of the list, they announce they’re taking Bart, Lisa, and Maggie away and giving them to a foster family, which seems crazy drastic. There wasn’t anything too crazy going on in the house, and I’m sure things wouldn’t move that quickly without giving Homer and Marge a chance to fix thing. But whatever, they have to cram this into twenty-something minutes.

The kids are then taken away from their parents, and delivered to their new foster family. The Flanders. They then barricade the two houses so Marge and Homer can’t see the kids. I really love the interaction between Grandpa and Homer when they get inside, still trying to figure out what the hell just happened:

Homer: ” We leave you the kids for three hours, and the county takes ’em away?

Man I love Grandpa. Anyway, that’s enough about Homer and Marge for a while, we’re now treated to some scenes showing what life in the Flanders household is like. Rod and Todd play with a printing press where they make their own newspapers, and shoot down Bart’s headline of “Extra! Extra! Todd Smells!” And Ned even tries to give them “nachos,” which are cucumbers with cottage cheese on them. I love that Lisa describes the Flanders house like theirs, but with a creepy “Pat Boon-ish” quality. But it’s not just the Flanders influencing the Simpsons, because we also see Bart get Ned, Rod, and Todd watch Itchy and Scratchy with him and Lisa, and it’s great. This may be my favorite Itchy and Scratchy, all because of the end. Scratchy basically gets an orphan Itchy on his doorstep, and Itchy kills him, all standard, but as Itchy runs away with Scratchy’s stolen TV, Scratchy delivers a weeping line of “Why? Why? My only son!” And that made me laugh to hard. But Ned didn’t find it funny at all, and it pretty much scarred Rod and Todd. 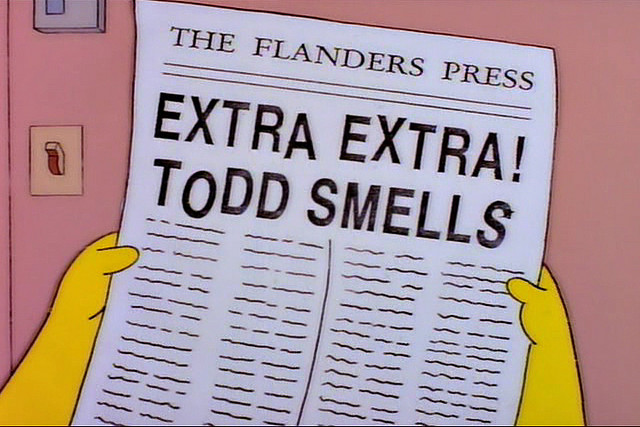 And at this point in the episode Homer and Marge start working on getting the kids back, and visit the courthouse, which is sporting an amazing statue of John Swartzwelder. They talk to a judge and are informed that they can get the kids back when they complete a parenting course. So they go to the parenting class, which is taught by one of the Child Service people, and sadly not Troy McClure. Marge is mortified about how remedial the skills they’re being taught are, but Homer is learning all sorts of new things, like putting garbage in garbage-cans.

But while the parents are learning, Bart and Lisa are starting to get worried about the situation, because they think that Maggie may be forgetting Homer and Marge, and loving Ned more than them now. There’s then an incredibly sweet scene when Bart and Lisa reminisce about their parents and end up getting really sad. They then make a copy of Todd’s newspaper with a message about how they miss Homer and Marge, and stick it to their door while Homer and Marge are sadly reminiscing about the kids. It’s really adorable.

But we’re now in the part of the episode where things start to go wrong. We see that Homer and Marge are passing their test, because Homer can role-play well with Cleetus. But Ned is having everyone play some weird Bible trivia game, and makes a startling revelation. Because Bart thinks that the Beast from Revelations is Jesus, it comes out that none of the kids ever got baptized, which makes Ned freak out. He calls Reverend Lovejoy, who is irritated with Ned and tries to get him to switch to one of the other major religions, since they’re basically all the same. “Damn Flanders.” And since Lovejoy wasn’t much help, Ned decides it’s his Christian duty to go baptize the kids himself.

Meanwhile, Homer and Marge have passed their test, and are now allowed to take the kids back. But when they get home to rescue the kids from the Flanders house, they find that Ned has taken them to get baptized, and they book it to save the kids. Ned takes them to some river, and is getting ready for the baptism while Homer discovers where they are by thinking like Flanders. “I’m a big four-eyed lamo and I wear the same stupid sweater every day.” So they get to the river, and Homer comes crashing down to the river, desperate to stop the baptism, even going so far as diving into the river and taking the baptism for Bart. And the kids are saved! Bart and Lisa run to Homer, thrilled to have him back. But Maggie doesn’t seem to be on board for getting into the river with her weird family, and starts to tottle back to the Flanders, before seeing Marge, and she quickly decides she would rather go to Marge. Marge comes and picks Maggie up, and Maggie’s a Simpson again. And with the family whole, they head back home together while Homer tries to get dirt about Ned.

This is such a weird episode. There’s a lot of great family stuff throughout that really works for me. Bart and Lisa telling stories about their parents while missing them, while Homer and Marge are doing the same thing in the house next door was really well written and handled. I really loved that. And the ending is super sweet, the animation of Maggie’s little fingers wiggling because she’s so excited to see Marge is wonderful. But the whole subject of the episode is kind of weird. The kids getting taken away, and given to the Flanders with basically no legal problems is super strange. It was just an odd setup, and really wanted us to ignore the logical problems the episode had. I don’t know, the plot just kind of fell apart for me, but it had some truly great moments sprinkled in it.

Take Away: It’s apparently super easy to get your kids taken away. And get them back.

“Home Sweet Homediddly-Dum-Doodily” was written by Jon Vitti and directed by Susie Dietter, 1995.