Well, I’ve ranted and raved about flashback episodes ad nauseum, what about flash-forwards? The show definitely didn’t make that many, at least from the episodes I’ve seen, but they can certainly be a mixed bag. It’s odd to see these characters we love in the future, guessing what they’ll be like, because it can sometimes be kind of depressing. But let’s dive on in to what’s probably the best flash-forward of them all.

Things start off in a Renaissance Faire, which are always rife for comedic fodder. We see a fight between knights that turn out to be Ned Flanders and Mr. Smithers, which was apparently real because Smithers gets hardcore messed up. And man do I love the little gag of Maggie giving a thumbs-down like a cruel dictator while Marge and Bart talk about looms, and how great Marge is at them. But the plot really gets going right off the bat by showing what Lisa is up to. She wanders around and finds a tent run by Chief Wiggum full of “mythical” animals. She looks at the lame attempts to make monsters, and ends up chasing a rabbit out into the woods behind the Faire. And while back behind the actual Faire she comes across a strange little tent that’s out of the way. She checks it out, curious, and finds it has a gypsy fortune-teller in them. Lisa is a little wary of the fortune teller, until she shows she can at least tell the present by accurately saying Homer is heckling a puppet show. So she starts telling Lisa the story of her first love, with the ominous warning of the Happy Squirrel tarot card. 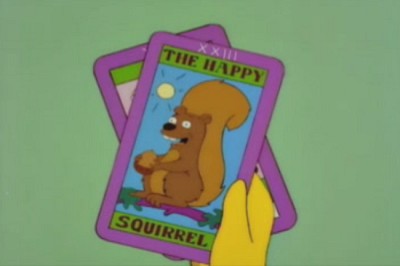 We cut to the far-flung future of 2010, and see that Lisa is at college in a vaguely explained “Eastern University.” She wanders around the campus, continuously running into a rude British guy named Hugh who keeps getting the things she wants. He gets a gross soy snack, gets the elevator before her, and ends up checking out the textbook she needs from the library. She confronts him, and the two start arguing about the book, which ends with them angrily reading the book together. And since this episode is a romantic comedy, this initial hatred leads to love, and the two start making out, much to the confusion of the librarian robot, whose head melts.

Lisa and Hugh begin dating, enjoying being arrogant vegetarians and Rolling Stones fans. They end up taking a flight to England to meet Hugh’s parents, which seems to be an incredibly awkward trip, due to the dry British wit. Although we do meet Hugh’s insane uncle who dresses like he’s from the 1500’s, but is actually just crazy. “I get me brain medicines from the National Health!” But we see the real goal of the trip was for Hugh to propose, which he tries to do with elaborate fireworks, which mess up. So he goes to his plan B, which is just to have a cow with “Marry Me” written on it waddle out. She accepts, and the two are officially engaged!

So Lisa Skypes Marge to tell her the good news, which thrills Marge. They begin planning the wedding right away, and agree that Homer will not be allowed to plan anything. We then get to see what depressing things the citizens of Springfield are up to in the future. Bart is some sort of demolition-man whose company knocks down buildings and Homer is still working his same job at the Plant while Lenny and Carl have become management. Even Milhouse is above Homer in the company, and is really sad to learn that Lisa is engaged, since he apparently tried to propose to Lisa in high school. And man did Milhouse age poorly.

We keep seeing what people are up to in the future as news begins spreading around the town. Maggie apparently talks like crazy, but keeps getting shot down the whole episode, and Marge reveals that she got a court-order to stop Homer from planning the wedding, since he wants to do it at Moe’s. Smithers gets the invitation too, and we learn that Mr. Burns is cryogenically frozen due to 17 stab wounds in the back. Principal Skinner and Ms. Hoover are also invited as we see the dystopian school of the future, where Troy McClure is some sort of Pepsi-sponsored mass-teacher that Ms. Hoover just plays. We also learn that Martin “died” in a science fair explosion, and lives in the basement like the Phantom of the Opera.

Lisa and Hugh show up to Springfield for the wedding, and things start to get terrible quick. After a quick cab-ride from former-Mayor Quimby, they get to the Simpsons house. Homer and Bart try to make Hugh feel at home with a British flag, but it unfortunately bursts into flames from a bug zapper, which isn’t very inviting. They end up staying in the Simpsons house, which has all these shoddy additions that Homer clearly did himself, and Hugh gets to see the craziness that is the Simpsons family. They have a weird dinner where Bart, Homer, and Maggie are horrible and ill-mannered. And things get even worse for Hugh when Homer and Bart bring Hugh out on the town! They go to Moe’s, which has gotten even more depressing, as Hugh and Moe argue about World War II and III. We’re also introduced to the big conflict of the episode, when Homer asks Hugh if he would wear these family cufflinks during the wedding, which are little pigs in wedding clothes, and Hugh isn’t pleased. 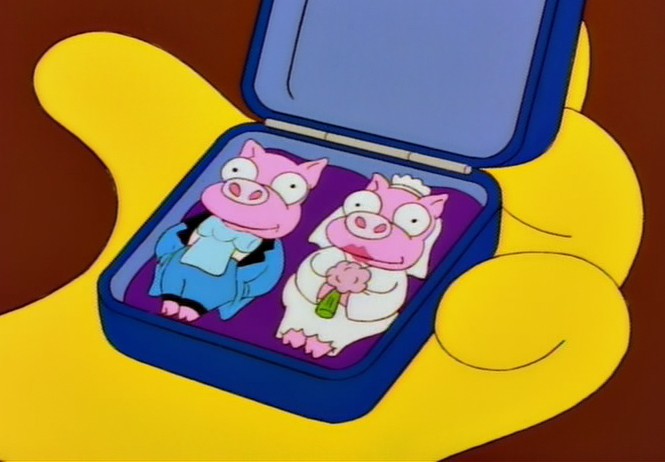 And it’s wedding time! Things accelerate quickly, and we see Marge and Lisa getting her wedding dress ready. There’s a weird moment when Lisa says she feels weird about wearing white, because she apparently had sex with Milhouse, but they just laugh about that thought and move on. But there is an incredibly emotional scene when she’s trying to check off the things a bride need, and her “something blue,” is a lock of Marge’s hair. But that’s enough emotion for a while, we get back to more silliness where Hugh is introducing his parents to Homer, who is incredibly awkward and tries to bond over the fact that he’s seen Octopussy twice.

People start showing up for the wedding, and we really hammer in the fact that no one in Springfield is going to age well, especially Krusty who looks awful. But when Homer comes to check in on Lisa, she finds that he’s wearing the pig cufflinks, which raises a red flag. She asks Homer about it, and he says that Hugh didn’t wear them, and feels awkward about bringing it up again. So Lisa takes the cufflinks and goes to confront Hugh about not honoring Homer’s tradition. Hugh is instantly shitty, explaining that he doesn’t want to wear the pig cufflinks, and ends up revealing that he never wants to see the Simpsons again, and will basically remove Lisa from the family forever. She gets super pissed about this, and leads to a pretty great interaction between them:

Hugh: “You complain about them more than anyone.”

Lisa: “Maybe, but I still love them.”

And just like that, Lisa calls of the wedding, since she obviously never had this conversation before. Hugh comes to inform everyone that the wedding is off, interrupting Maggie right before she sings, and everyone is disappointed. So we comes back to the present, and the gypsy explains that this wasn’t Lisa’s “True Love,” just her “First Love.” So Lisa heads out, thinking about the vision she just had, and runs into Homer. The two then walk hand in hand back to the Ren Faire as she’s excited to hear about Homer’s day, just glad to have her father still in her life. 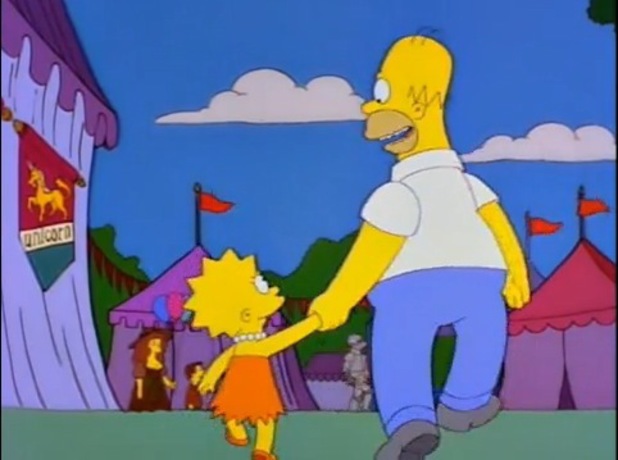 This episode is odd. Flashback episodes kind of don’t have a lot of plot to them, and are more just a series to sight-gags to see how everyone is aging. I don’t think I ever really got that before trying to write this article and I realized that not a lot of plot happens, it’s mainly gags. We get to see where everyone is, and how bad their lives are going for them, and it’s mostly super funny. There’s great jokes and it remains funny throughout, but it ends up being pretty light on the emotion, until the end. That twist with the marriage not going through because Lisa feels a strong love of her family kind of comes out of nowhere, but it really hit me. We’ve established before that Homer is dreading the day Lisa grows up, because he thinks she’ll leave the family forever for bigger and better things, and this episode shows that while she may leave, she’ll never forget them. Yeah, Hugh didn’t seem like that good of a guy all around, but even if he was perfect in every other aspect, if he expected Lisa to forget her family, she would break up with him. Because even though she complains about them constantly, and they drive her crazy, she loves them with all her heart, and can’t imagine a life without them. And man does that scene of her walking off with Homer, determined to relish their time together delightful.

Take Away: You will age. Poorly. And even if your family drives you crazy, they’re still your family and you should keep them part of your life.

“Lisa’s Wedding” was written by Greg Daniels and directed by Jim Reardon, 1995.