That Time the Fantastic Four Went to Heaven 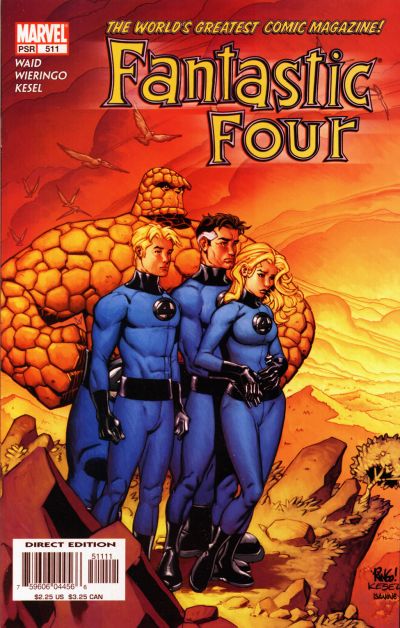 A while back I talked about the Fantastic Four storyline called “Unthinkable,” and how awesome it was. When I wrote about that story I had been going through the Mark Waid run of the title, enjoying the goofy fun mixed with the crazy drama that was it’s hallmarks. But after writing about “Unthinkable,” I took a little break with the series, and really dove into the wacky 70’s of Marvel, trolling around for some fun stories to write about on the site. I’ve found some stuff in Spider-Man, Iron Man, X-Men, and Luke Cage that I’ll get to on the site, but I took a little break from crazy Bronze Age books to pick up on that Fantastic Four run. And the story that came after “Unthinkable” was…okay. It didn’t really do much for me. Basically, after they sent Dr. Doom to Hell, the Fantastic Four decide to run Latveria, while Reed gets increasingly insane. He starts ignoring the wishes of the UN, and basically creates an international incident, while accidentally releasing Dr. Doom’s soul from Hell. As Nick Fury and some SHIELD soldiers storm Latveria, the ghost of Doom starts zipping between the Fantastic Four, until he possesses the Thing, which ends with Reed having to kill his best friend. It was a decent story, told a little bloatedly and with art that didn’t knock my socks off. But then I started the next story, and realized that I was beginning a truly insane story that I had only ever heard about. The time the Fantastic Four went to Heaven to steal Ben Grimm’s soul, and meet God. Holy crap. I didn’t even think this story was real for the longest time, and I certainly didn’t realize it was going to fall so close after “Unthinkable.” I kind of assumed it was some weird 90’s book. But nope, here it is, written by Mark Waid and drawn by Mike Wieringo, in all it’s bonkers glory. And the weird thing…it’s actually really good! But let’s get into it.

The story starts off with the family in shambles. Reed is a mess, dealing with his crazy melted face and the fact that he was more or less responsible for killing his best friend, causing an international incident that has gotten his family labelled as terrorists, and losing Sue and Johnny’s faith in him. Yikes. Meanwhile Johnny is losing his grasp on reality, carrying on conversations with an imaginary Ben while working as a mechanic in the city. And Sue is taking care of Alicia Masters, who is a total mess after the loss of Ben. And then they all get a call from Reed, informing them that he has a crazy idea to save Ben. They rush to the Baxter Building, more pissed at Reed than curious, and end up hearing him out. Turns out he stole Ben’s body from the Army (a plan that starts with stealing a corpse is always solid) and he has it hooked up in some crazy tank. Reed claims that there’s a flicker of Ben’s consciousness, because he refuses to use the word soul, still in the body, and he’s created a device to track the remainder of his “soul.” And the results of that experiment lead him to discover a new dimension, that they also dance around calling Heaven. So Reed’s plan is basically to take the machine that exploded in college and made Victor Von Doom into Dr. Doom, and use it to get to Heaven, because even though back then it sent Dr. Doom to Hell, Reed points out that that wasn’t it’s original purpose.

I’m not sure if anyone else has every pointed this out, because I’m not exactly an expert on Fantastic Four, but that kind of blew my mind. I’ve kind of always assumed that Doom built a machine to travel to Hell, since he knew that’s where his mom’s soul would be, but it does make sense that his machine was only supposed to find his mother’s soul, wherever it may be. The family debate the ethics of travelling to Heaven for a while, and decide to go for it. So they pile onto Dr. Doom’s Heaven Transporter, and blast themselves into the afterlife. Unfortunately they weren’t exactly sure what to expect, and end up landing in some crazy empty field, getting attacked by angels, which isn’t really what you want to happen when breaking into Heaven. It’s even more alarming that the angels are super aggressive and start warning the Terrific Three that they should get out of this dimension as fast as they can. 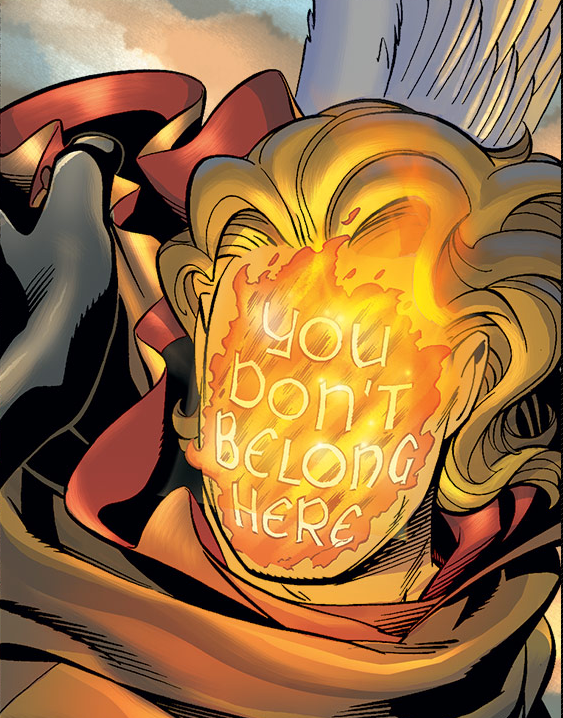 But, Reed Richards is kind of dumb, and doesn’t follow the suggestion of the flaming face he encountered, and the family press on. They start wandering through Heaven, encountering obstacles that should convince them to leave. We also learn at that point that Ben and his brother (who died when Ben was a kid) are hanging outside the gates of Heaven, chatting and watching the Three try to find Ben. And they watch as they have to build a bridge over a cloudy chasm with giant rocks that resemble the Thing, all while yelling at each other. They get a lot off their chests about Reed’s little unsuccessful coup, and the family gets increasingly aggressive to each other, even having Reed scream at Johnny that it was his fault Ben had to be killed. And things are even more complicated when they start getting hit with visions. They walk into a room filled with versions of Franklin and Valeria, which tempts Reed and Sue to just stay there, but that’s fixed when Sue starts chewing out Reed for being a weird obsessive lunatic, which is pretty earned at this point. But they break out of that vision by entering another, where Sue and Johnny’s parents are still alive. However, they aren’t there to temp the family, and are instead there to warn them to leave Heaven, telling them that things will get worse unless they leave. And of course they don’t, so they get hit with a tidal wave of blood like they’re in the Shining, and end up getting attacked by more angels. the angels are bearing down on the family, ready to kill them, when they’re saved at the last second by the human Ben. The family is reunited and they hug for a while, before Ben explains that he didn’t want to be saved, which Reed hadn’t even though as a possibility. Ben tells them that he’s ready to be over, that he gets to be with his brother as a human, and the only thing keeping him from getting to heaven is Reed. Turns out that flicker of Ben’s soul Reed found on Earth wasn’t really there, and the machine he has Ben hooked up to is just keeping Ben in Purgatory.

This is of course not what the family wants to hear, and almost immediately they begin squabbling. Johnny yells about how this isn’t the Ben he knew and tells Reed to bring Ben back, kicking and screaming if need be. They all start yelling at each other again, but this time we find out that Heaven doesn’t really like emotions, and this flagrant display of them is wrecking things. The area outside the gate starts to crumble, and Reed almost falls down a pit, but is saved by Ben. And once he saves them, Ben decides to come back to life, because the family is a fury-filled, dysfunctional mess without him, and he misses that. But as they decide to all head back to Earth together, Ben’s brother lets them know that God is wiling to let them stay in Heaven together. Reed, speaking for the team, declines that offer, which was apparently a test, and they’re granted an audience with the Creator. So they go through some crazy wormhole, and find themselves in front of a small wooden door. They open it and…well, just look.

Yep. That’s Jack Kirby, co-creator of the Fantastic Four and pretty much every other book at Marvel. He’s God! Which is just perfect. Of course Jack Kirby is the Creator of the Marvel universe. Although I do kind of wish they had made Stan Lee the Devil, instead of his “Collaborator” as they say in the ensuing pages. The Fantastic Four pick their jaws up off the floor, and walk in God’s Office, having a lovely chat with Jack Kirby, that really should have been filled with more profanity and cigar smoke if my knowledge of Kirby is accurate. He talks about what good characters they are before taking a phone call from Stan Lee, because he’s apparently making Black Panther comics in Heaven. He tells them about the mysteries of the Universe, and shows off the abilities of his magical pencil, before using it’s eraser to fix Mr. Fantastic’s face, which seems like kind of a cop-out, and then put’s the rocks back on Ben, because apparently he’s a more interesting character as miserable monster than a boring human, and God doesn’t want to be bored by the Fantastic Four’s antics. 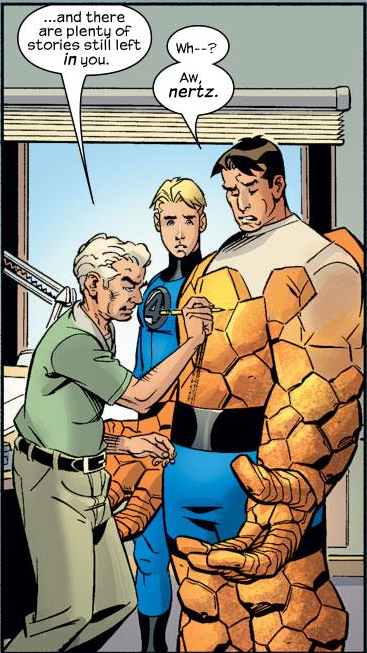 So with their appearances fixed from the last two stories, God send them back to Earth with the knowledge that their lives are all the whims of a small man from New York, and a picture of them in the future, which should make them a lot of money, being an original drawing by the Creator of the Universe!

This was such a silly story. It’s basically a reboot, which happens all the time in comics. But handled much better than a weird reboot usually is. Hell, when the writers got bored of having Peter Parker be married, they made him sell his soul the Devil to fix it, at least the Fantastic Four just had to go to Heaven to fix Reed’s face and bring the Thing back to life. This story really just hammered in my love for Ben Grimm, by showing that he’s just a true hero, willing to sacrifice an eternity in Paradise for the people he loves, even if that means becoming a weird rock monster again. My only complaint about this story is that it seems a little weird to have happened directly after the story that killed Ben. I feel like it would have worked a little better like a year or two after that, have the character be dead for a while, and explain that Reed has just been getting crazier and crazier, which would make his decision to travel to Heaven that much more believable, as if he had tried every other alternative. But that’s just a minor quibble, and doesn’t really detract from the fact that this story is just as bonkers as it’s reputation implied, while still remaining a pretty fun story.

“Hereafter” was written by Mark Waid and drawn by Mike Wieringo, 2004.