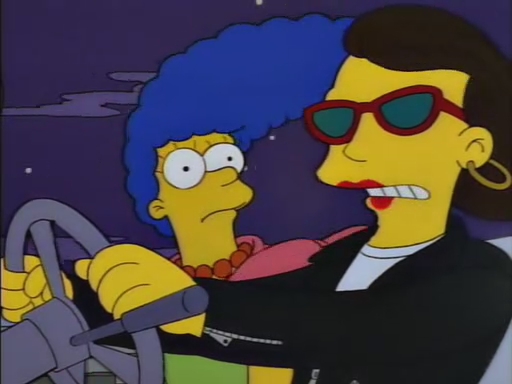 Yay, a really funny and great Marge episode! And one where the basic premise doesn’t completely revolve around the family being completely terrible. Yeah, Homer doesn’t come off great in the episode, but it’s not one that just hammers in how shitty of a husband he is.

We start off with the family watching a PBS telethon, because they know how to have a good time. There’s some Garrison Keillor-looking dude reading dull things, trying to entice people to donate, much to the family’s chagrin. After blaming the TV for not being funny we see Troy McClure tap Keillor out and actually put some life in the telethon by talking about his previous telethon credits, “Let’s Save Tony Orlando’s House,” being the best. Homer starts mocking the concept of a telethon for public broadcast, which begs the question of why he was even watching the telethon in the first place if he hates it so much. But while he’s mocking PBS he sees that Marge is donating some money and he gets very mad. She defends her choice to donate to PBS by telling him they gave her two tickets to the ballet, which Homer is shockingly excited for, mainly because he doesn’t understand what the ballet is. And this is one of my favorite Homer moments of all time, because Homer thinks that the ballet is a little bear wearing a fez driving a little car in circles while he cheers and sings the circus song. And I think the best part of this ridiculous idea is the fact that the crowd in his fantasy is sparsely attended, because even though he thinks it’s the coolest thing in the world, no one else likes it. 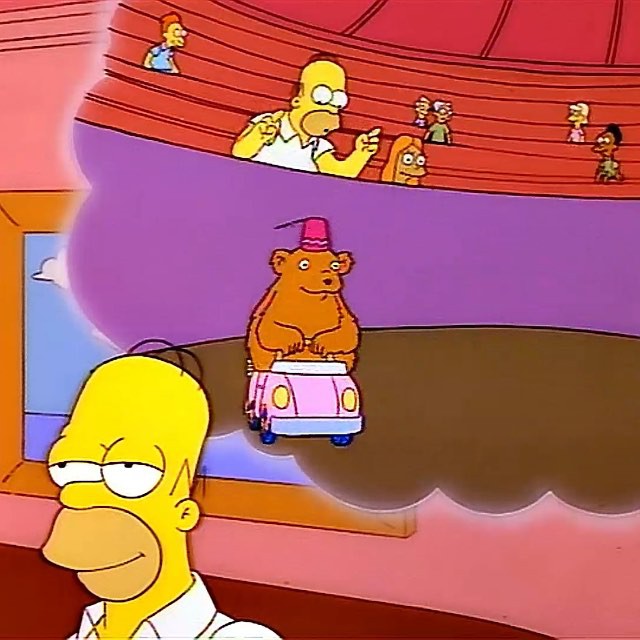 But while Homer enjoys his mental picture of a ballet, the actual plot of the episode gets going when Ruth Powers stops by to borrow a power sander, since she still exists. Marge lends her the sander and then Lisa crushes Homer’s dreams by teaching him what ballet actually is. We then head over to the Nuclear Plant, the day of the ballet, while Homer is complaining that he has to go watch people prance around for three hours, and as he’s leaving he comes across a machine selling new Crystal Buzz Cola, and he knows he has to get some. But he doesn’t want to pay for it, so he just crams his hand up the machine to try and steal one, and ends up getting stuck, causing Lenny and Carl to run away in fear. And without his pal’s help he starts dragging the machine around, trying to get some aid, but he instead runs into a candy machine and ends up getting caught in two machines now. He gives Marge a call to let her know he’s trapped in vending machines, and she’s initially crushed, before realizing she can take Ruth to the ballet for some girl-time when she returns the sander.

So Ruth and Marge head off to the ballet, which is taking place in a high school gym. Man is the ballet uninteresting. I really like going to see live entertainment, musicals, play, opera, and the symphony, anything like that. And the ballet is the dullest thing I’ve ever sat through. But this one at least looks a little fun since it ends with the ballerina slam-dunking on the basketball hoop. Meanwhile back at the Plant the firemen are there to cut Homer’s arms off, but he’s pretty cool with it since he thinks they’ll grow back. Luckily though, it turns out the only reason Homer is stuck is because he’s just holding onto the stuff he’s trying to steal, so once he lets go he heads home in shame. And after Marge comes home from drinking coffee with Ruth, Homer gets all defensive and shows her the note the firemen wrote him to tell Marge his situation was real. But shockingly, Marge isn’t that mad at him, because she actually had a great time with Ruth, and is going to go out with her again the next night, which makes Homer despondent because he apparently doesn’t want her to have friends.

The next night comes around and Marge heads out to spend time with Ruth, and is shocked to see her in a muscle car, wearing sunglasses and a leather jacket. Turns out Ruth wants to have a wild night, which she shows by turning on a cassette that starts playing “Sunshine, Lollipops, and Rainbows” before realizing that that’s the wrong song and switches it over to “Welcome to the Jungle.” The two then speed off for their insane night. When Marge leaves though, Homer starts to get super jealous, and starts trying to figure out who he could spend time with. He calls some of his friends, and it doesn’t go well. Lenny is busy shaving some lady’s legs (wife? Mom?), Burns is free to hang out but is busy acting like a teenage girl in the 50’s, and he just hangs up the second Flanders answers his phone. He then decides to go out by himself, and decides he needs a babysitter since he has a handy card in his pocket that says “Always do the opposite of what Bart says.” And just in the nick of time Lionel Hutz shows up, since he was digging through their trash, and offers to babysit the kids. 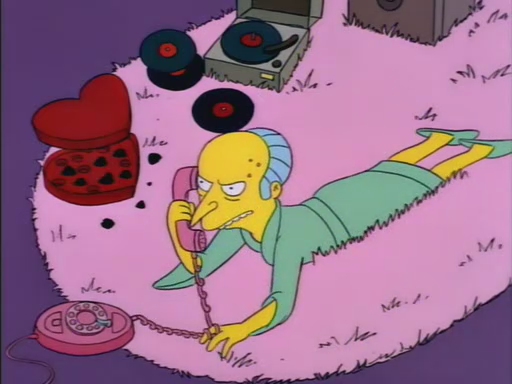 Meanwhile, Marge and Ruth are at a country bar called Shotkickers where people are fighting and Willie is confused why his chair is a mechanical bull. And after that they head to a rave where they run into Mayor Quimby and Otto. Then they head up to the Springfield sign and just take in the sights. But while that’s happening Homer is having a horrible night. Everyone at Moe’s treats him like crap, he gets kicked out of a Kwik-E-Mart for reading a magazine, and gets kicked out of a library for eating. We then pop over to see that while he’s babysitting, Lionel Hutz is burning all of his papers in their fireplace while claiming that he’s getting rid of the Lionel Hutz identity and becoming Miguel Sanchez. Marge and Ruth leave the sign to have some more adventures, and just narrowly miss Homer, who also comes to look at the view. But Homer ends up getting a buddy at the sign when he runs into Chief Wiggum, who is making moonshine by the sign. He offers to drive Homer home, and the plot starts to get nuts.

Wiggum is about to pull over Ruth because he thinks that one of her tail-lights is too small, and Ruth doesn’t pull over because it turns out the car is her ex-husbands, and she stole it, so they get into a late-night high-speed chase. And man do I laugh hard at the callback of having Wiggum’s chase music be “Sunshine, Lollipops, and Rainbows.” Anyway, while they’re chasing Homer realizes that Marge is in the car, and starts to get worried about her safety. Marge is also worrying, but Ruth gets away by turning off her light, causing Wiggum and Homer to assume that it was a ghost car. So Marge and Ruth get away, and end up at a diner in the early morning where Marge is going to leave her, since she’s too scared to be involved in the theft. Unfortunately the diner is full of women telling each other that they’ll stick together, even having the wonderful line from the cook when he says “stickin’ together is what good waffles do.” So Marge get back with Ruth while all the other clientele flee when Kearney comes by with a police siren. 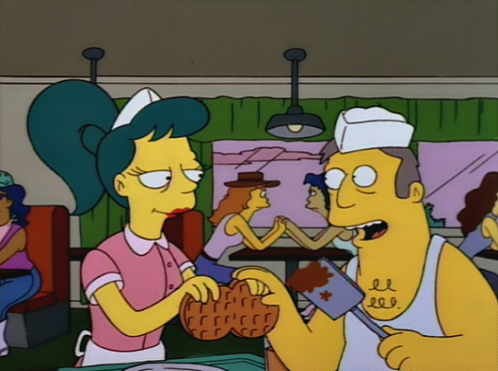 Turns out Wiggum and Homer were hanging out all night, and are trying to cook eggs on the cop car’s engine, when Ruth and Marge shoot past again and the chase begins anew. I love that Wiggum, ever the wonderful lawman gives his location by saying “I’m directly under the Earth’s sun….now!” We briefly pop back to the house, where Hutz has watched the kids all night, and they learn that Marge is involved in a high-speed chase while Kent Brockman starts having a breakdown about women disobeying and it being a sign of the end-times. “It’s in Revelations people!” But back in the car, Ruth is going to give up since every cop in the state is following them now, but Marge wants them to keep fighting and gets them to swerve into the desert, not knowing that they’re heading for a chasm. Homer then gets out a blowhorn and starts trying to talk down Marge while apologizing for the whole marriage. But in the middle of his apology he mentions the chasm, and they quickly pump the breaks, narrowly avoiding flying off. Wiggum and Homer aren’t as lucky though, and end up going over, only to be saved by the landfill that’s in the chasm now. The episode then ends with a goofy Dragnet parody where we see what everyone in the episode’s crimes and punishment were. 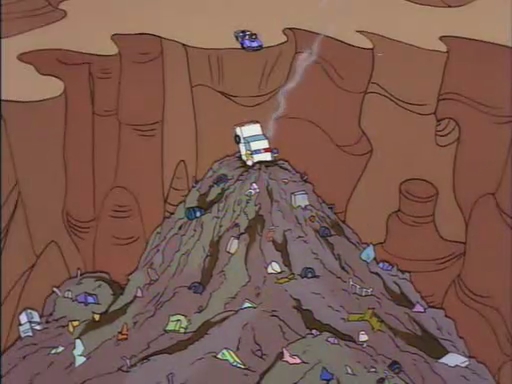 This was a fun episode, especially for a Marge one. I feel like even though they’re often good, Marge episodes are usually a bummer. They’re usually so dour and about how badly the family treats her, but this one is a blast. Her and Ruth’s relationship is fun, and it’s great seeing Marge let her hair down and get in touch with her wild side. Plus the whole subplot with Homer and Wiggum is a blast, because those two are great together. It’s just a great episode all around.

Take Away: Ballets are boring, don’t be a crappy husband, and let your spouse have friends.

“Marge on the Lam” was written by Bill Canterbury and directed by Mark Kirkland, 1993. 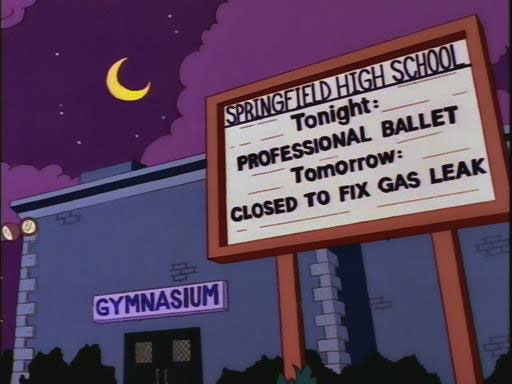 Tagged as: Lifetime of Simpsons, Marge on the Lam, Season 5, the Simpsons