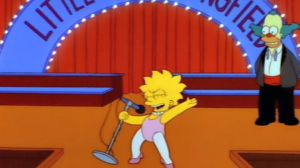 Yet another Homer and Lisa bonding episode everyone. And it’s one that wasn’t really one of my favorites. I’m not sure if it’s the episode’s fault, or if the insane structure of this project is just kind of getting me burned out though. I definitely didn’t remember so many episode, at least so close together, that were just about Homer’s relationship with the kids, especially Lisa. This is still a good episode, but man is there a high-bar for Homer/Lisa stories.

The episode starts off with the family enjoying some sort of fundraising carnival at the Elementary School, which a sign refers to as the “Happiest Place on Earth.” And just as soon as you realize that that’s copyright infringement we see the Blue Haired Lawyer and two goons who are representing Disney come harass Principal Skinner. And when the goons start to intimidate Skinner, we get one of my favorite things about Skinner, which is that he’s a crazy ex-Green Beret, and he beats the crap out of them. I’m quickly realizing that Principal Skinner is one of my favorite characters that I’ve kind of underappreciated. We then roam around the carnival, looking at some weird gags. Bart is running a 3-Card Monte game, and vanishes in a puff of smoke when he’s caught, Willie is selling Haggis to no one, Otto cranks up the power to a ride and sends a car flying off into the side of the school, and the bullies are running Jimbo’s Spookhouse which is just a shed that they mug kids in. But the plot finally starts developing when Lisa stops by a caricature booth, and ends up getting an incredibly unflattering portrait drawn, leading her to assume that she’s ugly. Meanwhile, a raffle is going on and Homer wins the grand prize, a ride in the Duff blimp. 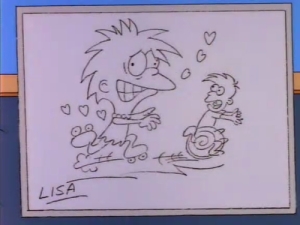 Back at the house Homer is prancing around singing about blimps when he comes across Lisa crying in her room, devastated that she thinks she’s ugly. He tries to help by telling her that she’s cute as a bug’s ear, but Lisa doesn’t believe him, assuming that parents have to think their kids are cute. There’s then a hilarious scene when Homer asks Grandpa, who happens to walk by the door, if he’s cute as a bug’s ear, and Grandpa responds “No, you’re homely as a mule’s butt!” Homer starts to get sad that Lisa is so down on herself, and heads off to Moe’s to drink and think of something to do to help her. And while he’s there he sees a commercial on Moe’s TV about the upcoming Little Miss Springfield child beauty pageant that’s hosted by the slimy Laramie Cigarettes. Homer then decides that the best way to boost Lisa’s self-esteem is to sign her up for a contest that judges beauty, without her consent, but runs into an issue when the price to enroll is $250. But his love for Lisa gets him to make the ultimate sacrifice, and sell his blimp ticket to Barney for the enrollment fee.

As anyone who isn’t Homer could have guessed however, when he gets home and tells Lisa that he signed her up for a beauty pageant, she gets pissed and refuses to do it. But then Marge tells her that Homer sold the blimp ticket to get her into the pageant, so she decides to give it a shot, for Homer more than anything else. So Lisa starts preparing for the pageant, and quickly realizes that she has no idea what she’s doing, and that she’s intimidated by the reigning champion, Amber Dempsey, a girl with fake eyelashes she got in Paraguay. Lisa then starts to get help from Bart and Marge, while Marge has a weird sexual fantasy about golfer Jack Nicholas. They then head off to the beauty salon, and after some ridiculous sight-gags, Lisa gets a haircut that’s barely different from her normal one. But before they get back Homer teaches Bart an important lesson about women, that they like compliments, which he then immediately uses to get free ice-cream from the old lady at the ice cream parlor. Bart then starts teaching Lisa the tricks of the pageant, even teaching her how to walk in heels, and then gives her a big confidence boost by telling her that “she’s not ugly,” the greatest compliment a brother can give a sister.

The pageant then begins, and Krusty shows up just in time to host it, and we get a brief shot of Ms. Pennycandy! Who doesn’t talk. Boo. But Krusty is always a great host for things, and the pageant goes off to a great start. There’s not a whole lot to talk about the pageant, other than the weird fact that Lisa does some sort of weird Flashdance thing, instead of playing her sax for the talent portion. Weird. But by the end of the pageant Lisa only gets runner-up and Amber wins, becoming Little Miss Springfield. But we aren’t at the end of the episode, so we get a weird twist when some vague time in the future the family is sitting around watching TV, where Amber is dedicating the new Swedish Megastore, SHOP, and she’s struck by lightning. Lisa is then sworn in as Little Miss Springfield, and they don’t even have the decency to get her a new scepter and crown, just giving her the melted and still smoking ones they pried off Amber’s body. She’s alive, but I assume they just went straight from there to Lisa.

Lisa then begins her reign as Little Miss Springfield to a weird start by visiting the troops at Fort Springfield with Bob Hope. Unfortunately the soldiers thought there were getting the adult Miss Springfield to ogle, so they riot and Lisa and Bob Hope have to flee like they’re in Apocalypse Now. Unfortunately it’s around then that Lisa learns that as Little Miss Springfield, she’s expected to shill for Laramie Cigarettes by riding a float shaped like a pack of cigarettes and throwing out samples to people. We also see their previous mascot, Menthol Moose, which was hilarious, because my grandpa was super in Camel cigarettes when I was a kid, and he had a lot of Joe Camel stuff. But during the parade Lisa sees some kids, and even Maggie, take the cigarettes, so she puts a stop to the parade, and announces her hatred for cigarettes. She then starts taking down all the evils of Springfield society, such as pausing before singing the National Anthem at a college football game to talk about athletics taking money away from important education. But when she threatens to take down Mayor Quimby’s corruption, a secret cabal featuring Quimby, Chief Wiggum, and the head of the Laramie Cigarette company decide to remove her from…office? The episode then ends with one of my favorite Kent Brockman scenes where he’s explaining how Lisa got fired from being Little Miss Springfield because Homer filled out the application wrong in the first place. But while he’s talking about the story, he tries to throw to a video, and instead we get a ridiculous video of a baby goat sucking from a bottle, which irritates Kent. We then pop over to Homer and Lisa, who are watching the news, and Homer apologizes to Lisa, telling her he just wanted to make her feel better about herself. But Lisa ensures him that he succeeded, and even though she lost her crown, she still feels great about herself. Then just to end on a joke instead of a sweet moment between Homer and Lisa, we see Kent Brockman trying to call up a video of his interview with the pope, but the goat comes back on, causing Kent to storm out of the studio in one of my favorite Kent Brockman moments of all time. 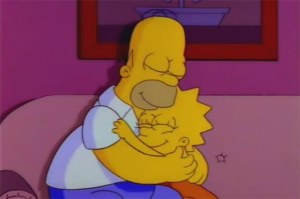 This was a really great episode, but like I said up top, it’s not one of my favorite Lisa/Homer stories. But Homer/Lisa episodes are just so great, that even though this episode is wonderful, the best Lisa/Homer episodes are some of the best of the whole series, so it’s hard to compete. Their relationship stuff is so fun and sweet in this episode, especially Homer just being unable to even fathom that Lisa isn’t the cutest girl in the world. The stuff with Lisa getting mad with power was a little odd, and probably what kind of knocked this one down a couple pegs for me, but it’s still so great.

Take Away: Kids shouldn’t smoke cigarettes. And you don’t need to be in a beauty pageant to prove you’re beautiful.

“Lisa the Beauty Queen” was written by Jeff Martin and directed by Mark Kirkland, 1992.

Tagged as: Lifetime of Simpsons, Lisa the Beauty Queen, Season 4, the Simpsons