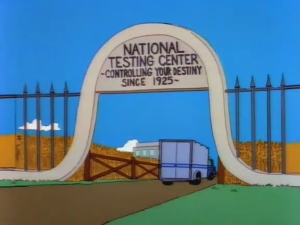 Here’s a weird episode guys. We get to see Bart and Lisa act like the opposite of their normal behavior, but not like a Freaky Friday situation where they act like each other, they just act different. It’s strange. Although it is a nice indictment of standardized tests and aptitude tests in general. I guess I’ll dive right in.

The episode starts right off with Mrs. Krabappel messing with the kids by telling them she has a special surprise for them that day, leading to the kids having crazy ideas including an American Indian wrestling a crocodile, some sort of cupcake gnome, and Bart’s idea that she’s going to reveal she’s some sort of alien. Unfortunately she’s just screwing with them, and the surprise is an aptitude test, the CANT test to be specific, which is a pretty silly but fun joke. We find out that the whole school is taking the test on the same day, and no one is happy about it. Man standardized tests are pointless. I assume they still exist, but I doubt they’ve become any more useful than they were when I was a kid. I know out local Denver test, CSAP, was widely considered a joke, to the point that I knew a dude in high school who just wrote the lyrics to Welcome to the Jungle as his essay. But the kids start taking their test, which has incredibly obvious questions, like being a carpenter ant or lawyer bird. I love that when they’re done and Janey makes a discouraging comment about the test, Lisa says that “School is never a waste of time.” Oh Lisa. The tests then get taken to Iowa by armed guards like they’re picking up a deposit of money. And the Iowa thing is real right? I feel like I remember all the stupid standardized tests I took as a kid being sent to Iowa, and that that’s not just a random joke. I’m sure I could Google that, but…eh. Unfortunately the man who fixes the machine that grades the test is an old man on a rocking chair, so when it malfunctions grading the Simpsons kids’ he gets it going, but obviously something went wrong.

We cut back to Springfield Elementary where Dr. Pryor is telling the kids what they’re going to be when they grow up, and we find that Lisa has been labeled a homemaker, and Bart has been labeled a cop. I love that Pryor tells Bart he had him pegged for a drifter, and we get to see Bart’s crazy fantasy of him as a drifter. “Lousy sheriff, run me out of town. He lost my vote.” But while Bart is excited about his fate as a cop, and even gets to go on a ride along, Lisa is furious with her vocation, and starts to get really condescending toward Marge about it. Lisa insists that she’s going to be a famous jazz musician, and comes up with a crazy future for herself, such as being loved by the French and staying away from drugs, but having a string of doomed affairs. So Marge brings Lisa to some musician to appraise her talents, and while he says she’s good, he also says she can never be a pro because she has stubby fingers. 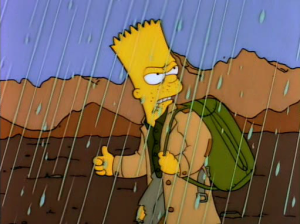 Bart’s plot really gets going when Eddie and Lou show up to take him on a ride along, and I love that Mrs. Winfield assumes he’s getting arrested. They take Bart all around the city, even showing him the sleazy motel Mayor Quimby is getting laid in. We also see Sideshow Mel taking his dog for a walk while roller-blading, which is one of the silliest images I’ve seen on this show in a while. Police ride-alongs are weird. I did one in college, and it was a pretty boring night. The thing I really learned was that there’s a lot of paperwork and sitting around being bored. We just kind of hung around, waiting for something to come through, while the cop talked with other cops on some sort of instant messaging service they had on their dashboard computer. We did get to break up a barfight that involved a guy biting people’s nipples. That was neat. But other than that, I think being a cop in the suburbs is boring as hell, which is just what Eddie and Lou are telling Bart when Snake comes speeding by, and they start a high-speed chase. I love that they pass a milk truck that explodes like it’s full of gasoline, because stuff blowing up that shouldn’t is always funny. But they finally get Snake down an alley into a dead end, and Eddie gives Bart a revolver to cover them. But as Eddie and Lou wander off to find Snake, he guns his car right at Bart. Bart starts firing the gun, but it jams, and he pretty much accepts his impending death while we get a crazy freeze frame and a “To be continued…” chyron flashes up at the bottom of the screen.

After the commercial break ends we get Act II of the story, “Death Drives a Stick,” and almost immediately Snake’s care gets smashed into the alley, and Bart is safe. Chief Wiggum shows up, and says one of my favorite lines of his, “Looks like you just bought a lottery ticket…to jail!” “Sir he’s unconscious.”And to reward Bart’s heroism, he makes him an honorary police officer. And it quickly goes to Bart’s head, as he starts fingerprinting Maggie, and even takes surveillance photos of Homer eating a cake to get him bused. But while all of this is happening, Lisa has been getting more and more sullen, refusing to accept her vocation of homemaker. Marge tries to inspire Lisa with a crazy story about her wanting to be an astronaut and Patty and Selma shooting her down, but Lisa seems too far gone. She even starts hanging out with the bad girls at school who smoke in the bathroom, and she convinces them to egg the stuffed Puma that’s the school’s mascot. And she made a good call, because it crushes Skinner. But back over in the Bart plot, he gets Willie arrested for illegally burning leaves, and Skinner makes him a hall monitor. I love his crazy fantasy about being in court taking down a mobster with the whole “Witness’ voice altered to sound like Steve Allen,” gag. But Bart accepts, and the two begin running the school with an iron fist. 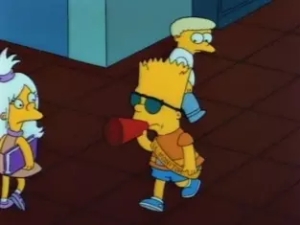 But things escalate in the Lisa story when she tells Ms. Hoover to shove it. And she officially becomes one of the bad girls, hanging out in the bathroom smoking Laramie Jrs. I love the gag that Bart gets to go to the confiscated items closet, and Bart gets to take something, and he chooses a crossbow. Bart then becomes a detective for Skinner, and starts solving all the “crimes” in the school, creating a police state. But then Lisa finds out that Ms. Hoover doesn’t actually know anything, and gets all the answers from a teacher’s edition of her textbook, so she decides to steal them all. The teachers then all freak out, since none of them know anything. Mrs. Krabappel has Martin teach, a hippie teacher tells the kids about the 60’s, and Ms. Hoover just runs away. It’s a crisis. The police even send bloodhounds out to find the books, but they just take them to the library. Bart and Skinner start searching all the lockers, and Bart ends up finding the books, and once he realizes its Lisa’s locker, he takes the blame. Skinner takes away his hall monitor status, and gives him massive amounts of detention, but Bart isn’t sad, because like he says, Lisa has brains and talent, and will go far, and he’ll be right there to borrow money.

This was just a weird episode. It was fun to see Bart and Lisa become the opposites of themselves, but it kind of didn’t work well for me. I feel like it would have made more sense to have Lisa become like Bart, and Bart become like Lisa, but that wasn’t quite what happened. Bart didn’t become smart, he just became law-abiding, and Lisa became even more of a bad kid than Bart. I think the Lisa stuff just didn’t work for me, but I did love Bart as a cop, even though he became a fascist near the end. And it was sweet to see Bart stand up for his sister, and destroy his future career.

Take Away: Standardized tests are pointless, don’t listen to them.

“Separate Vocations” was written by George Meyer and directed by Jeffrey Lynch.

Tagged as: Lifetime of Simpsons, Season 3, Separate Vocations, the Simpsons