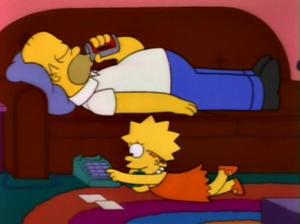 Hey everybody! It’s another episode about Homer and Lisa’s relationship! I really didn’t remember that Season three was so jam-packed with episodes about Homer’s struggling relationship with just about everyone in his family. Homer really has to do a lot more work keeping his family happy than I ever have.

Anyway, the episode starts off with Homer watching football, and we get to see a parody of those super cheesy bumpers that came before NFL commentaries that used crappy early CGI. Do those still exist? I’ve never been a football fan, but as a kid I would still sit in the living room as my dad watched it, and I like read or whatever, and I remember FOX especially had these weird CGI robots that would play football. Brings me back. Anyway, Homer’s watching the football commentator’s babble about stats and crap, but he’s mostly there for gambling advice. Then Smooth Jimmy Apollo, a pretty obvious parody to Jimmy the Greek, shows up to talk about how everybody should bet on Denver. And let me tell you, as someone who has grown up in Denver his whole life, don’t bet on Denver. I don’t know much about football, but I know that the Broncos are not your bet. So Homer decides that Denver is a lock, and calls his bookie, who is Moe because of course Moe is a bookie. 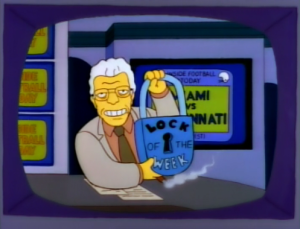 Meanwhile, Lisa shows up trying to show Homer the apartment she made for Malibu Stacy out of a shoebox, but he doesn’t care, and sends her away. She initially goes to complain to Marge that Homer never shows any interest in things she likes, and Marge points out that Lisa never expresses interest in Homer’s passions either, so Lisa decides to make an effort, and watch football with Homer. Homer is a jerk at first, not wanting to be bothered by Lisa while he watches the game. After seeing Lisa try to bond with Homer, Marge decides she and Bart need to hang out, so she makes him go clothes shopping, which is still something I hate to this day. But while Bart and Marge head to the mall, Lisa starts to get into the game. The Broncos lose (duh) and Homer can’t decide who to bet on in the next game, and after calling a hotline that charged by the minute and talked as slowly as possible, he asks Lisa for her advice. She completely guesses that the Dolphins will win, so Homer calls in the bet.

We cut over to Bart momentarily to look at the half-baked B plot where he and Marge are shopping at a place called Wee Monsieur’s and Marge is giving him the absolute worst clothes. Bart then has to start trying on a pile of terrible clothes, which really is the worst part of clothes shopping. I try my best never to try stuff on. If it doesn’t fit when I get home, it gets returned. Stupid clothes. Although I do love that we see the security guards grab shotguns to confront a girl who stole socks. Anyway, back to Homer and Lisa. Turns out the Simpsons children have gambling gifts, since now both she and Bart (Bart the Murderer) have correctly guessed the outcome of sports gambling. She’s not cool with the gambling at first, but Homer explains that it just makes a good thing better, and they agree to keep it a secret from Marge. They decide to make Sunday football a tradition, especially since Lisa has a knack for guessing the winners. She even starts researching football at the library, and uses statistics to figure out the winners. Which seems way better than what most people do. I watch my coworkers get all pissed that their NCAA brackets are messed up, when they pick teams they like instead of teams that will win. You have to gamble with cold reason, no emotionality. But things are going well for Homer and Lisa, because their Daddy-Daughter days are starting to rake in the dough for Homer.

But the money and success is starting to go to Homer’s head. He takes the family out to dinner and they all kind of act like assholes to the waiter, but it is super cute that Homer gets the violin guy to play Lisa’s favorite song. Lisa even writes an essay about her a Homer spending time together for the topic of “happiest day of your life.” Although the winner of that assignment is definitely Ralph, since we hear his closing sentence as “When the doctor said I didn’t have worms anymore, that was the happiest day of my life.” I love that Homer buys the family all sorts of gifts, like perfume for Marge, toys for Maggie, and some sort of little electronic speaker for Bart that says “Kiss My Butt” “Shut Up” and “Go to Hell.” But things start to fall apart after Homer admits to Marge that he and Lisa are gambling, and she gets mad. And he really messes things up when Lisa starts making plans to go on a hike the Sunday after the Super Bowl to shake Daddy-Daughter day up, and Homer admits that he had no plans to continue Daddy-Daughter day after the football season. Lisa is crushed, of course, and even has a weird nightmare where she sees herself as this wrinkly mess, gambling her life away as an old lady. 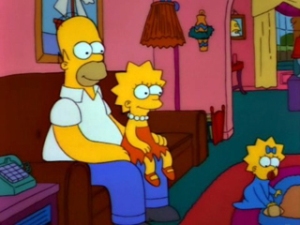 Lisa then gives away all the ill-gotten Malibu Stacy accessories that Homer got her from the gambling as an act of defiance. Then Homer comes in, like a moron, and tries to get her to tell him who to bet on for the Super Bowl. Lisa is understandably pissed, and tells him Washington will win, but after he celebrates, she tells him that there’s a chance she’s so mad that she’s telling him the wrong team, so that he loses. It then becomes clear that the stakes of the Super Bowl are now on whether Lisa still loves Homer. Homer ends up getting to emotional the day of the game, and heads over to Moe’s to watch it. He doesn’t even make a bet, he’s just focused on seeing if Washington wins, and Lisa still loves him. There are then some silly cut-away gags, like the weird as hell Halftime Show with the aliens dancing to “Rock Around the Clock,” and the dude running out of the Church when he realizes its Super Bowl Sunday. Not even Flanders was in the church. Jeez. Anyway, Washington wins, and Lisa still loves Homer. Yay! We then get the sweet scene of the two of them climbing Mount Springfield the next Sunday, continuing on Daddy-Daughter Day. 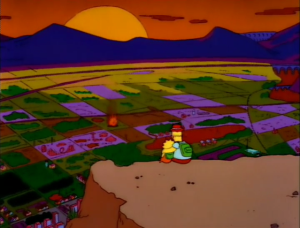 This is such a cute episode. I said earlier that it was weird this season was so full of episodes about Lisa and Homer’s relationships being in trouble, but they just keep knocking them out of the park, so it’s certainly not a complaint. It also brought up a really interesting idea that I had never noticed when I was a kid that Lisa succeeds in bonding with Homer by doing something he liked, not requiring it to be all about what she liked. And even though I really can’t stand football, it was really sweet to find them bonding over watching the games. It was just a really cute idea, and it worked beautifully.

Take Away: Don’t always expect people to do things you want to do, take an interest in them. Oh, and when you gamble, use your brain, not your heart, go with the stats, not nostalgia.

“Lisa the Greek” was written by Jay Kogen and Wallace Wolodarsky and directed by Rich Moore.

Tagged as: Lifetime of Simpsons, Lisa the Greek, Season 3, the Simpsons