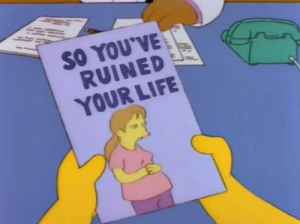 Flashback episode! And a depressing one at that. Man these episodes are great. Just like “The Way We Was,” this episode is structured around the kids being told a story, but I think its extra adorable that this time it’s all Homer, it’s just him telling the kids the story about Marge and his wedding and early months of their marriage. It’s so great.

The episode start right off with Homer and Marge sitting in the bathroom, while waiting for a pregnancy test to give a result. It’s hilarious that Homer bought them a Barnacle Bill’s Home Pregnancy Test, because it came with a free corncob pipe, which would totally sell me as well. But shockingly, the good people at the Barnacle Bill corporation didn’t make a reliable product, and they get an inconclusive result, so Marge heads off to Dr. Hibbert to get a more definitive answer. Homer starts to get worried about the potential new child, and he starts to tell them the story of his and Marge’s engagement. We then cut to 1980 where Marge and Homer have been dating for a couple of years, and things are going pretty good. Homer is working at a mini-golf place as the guy who turns the windmill’s blades, and Marge is living with Patty and Selma. Then we learn of the evening of Bart’s conception, which is amazing. The start the evening off by going to see the Empire Strikes Back, leading to the great scene of Homer revealing Luke Skywalker’s parentage to the crowd waiting to come in. We also get to hear Homer’s amazing compliment to Marge of “you’re as pretty as Princess Leia and as smart as Yoda.” They drive around listening to “You Light Up My Life,” and Homer talks about how God’s always angry, then they retire to the windmill on the mini-golf course, and have sex in it. And boom, Marge is pregnant. They confirm with an afro-sporting Dr. Hibbert, who gives them a pamphlet titled “So You’ve Ruined Your Life,” which I really would love to give people now that I’m an age where everyone is having babies. Homer asks Abe advice about the pregnancy, and of course Abe suggests that Homer proposes, since he’ll never get anyone as good as Marge, and now he has her trapped. So Homer decides to propose, and the scene is super sweet. He wrote down a really emotional proposal on a card so he could remember it, and then promptly loses it in the car. And while he’s digging around in the back seat for it, Marge finds it, reads the card aloud, and spoiler alert, accepts the proposal.

We pop back to the present for just a moment to hear Bart and Lisa argue if they should name the potential fourth Simpson child Ariel or Cool Modee Simpson. All the talk of baby names has Homer remember the time that they were shopping for wedding rings and talking about boy names. Homer makes it his mission to shoot down all of Marge’s picks because they rhyme with things that the other kids can mock him for, and doesn’t notice the problem with Bart, so they stick with it. So they head off to the romantic locale of Shotgun Pete’s Wedding Chapel, and get hitched. It’s so sketchy. The “reverend” doesn’t even learn their names and just has them speak a fill in the blank vow. The happy couple head back from their romantic nuptials to continue living with Patty and Selma while Homer realizes that he can’t get a house and support a family with the salary that comes from turning a crank in a mini-golf place. So he heads off to the new Nuclear Power Plant looking for work. Unfortunately the job he applies for only has two openings, and there’s two other guys applying for the job, and not only are they competent, they’re frat brothers with Smithers. So Homer leaves, jobless, and begins getting really weird part times jobs. He makes candles at an old timey place, sells knives door to door, and gets attacked by attack dogs. He even goes to a pyramid scheme, and the dude uses an overhead projector, which was hilarious to see. My teachers were still using overhead projectors my whole time in high school, so I know as of 2007 they were still in use, but I can’t imagine people use them anymore. It was a hell of a flashback.

But sadly Homer doesn’t find work, and things start to get bad for them financially. Repo men even show up and take all the baby stuff they had bought, and even take Marge’s ring. That’s the final straw for Homer, and he leaves the family, writing a letter to Marge, and heads off to find employment with the promise that every cent he makes will come back to Marge and the baby, and they won’t have to deal with his failure any longer. No one knows where Homer went, until Patty and Selma go to the lovely named Gulp-N-Blow fast food restaurant and see that he’s working as a chef there. And because they’re terrible, they decide not to tell Marge. I love that Homer goes and looks at the Power Plant like it’s a goddamned paradise. Anyway, Marge is obviously depressed about Homer’s absence, and Patty finally grows a heart, and tells Marge where Homer is working. So Marge goes to Gulp-N-Blow and talks to Homer through the drive-thru speaker, and they run out to reunite. Then things gets super emotional, and Marge tell him she wants him back, and he puts an onion ring on her finger to symbolize their love, and even says “pour vous,” in a super adorable nod to the whole French tutor thing. Homer then marches straight to the Power Plant, busts into Burns’ office and tell him to give him a job because he’ll be a completely subservient worker. Burns agrees, and Homer heads off with a job. He stops by the Bouvier house, and learns that Marge is in labor, and gets a ride to the hospital with Mrs. Bouvier. Homer then finally grows some balls and stands up to Patty and Selma, yelling at them to give him respect and stop demeaning him. Then little Bart is born, and Homer gets to hold his son for the first time. Bart then promptly lights Homer’s tie on fire with a lighter, because he’s a natural born trouble maker. With Bart’s birth, the story is over, and we see Homer tell the kids that he was blessed with each of their births, and is ready for a fourth kid if it comes to that. But then Marge comes home, announces she isn’t pregnant, and they high five. 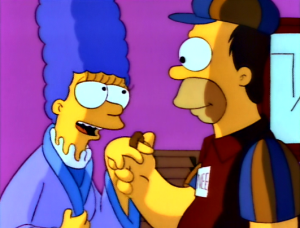 Man this episode rocks. I’ve mentioned before that I love all of the flashback episodes I’ve ever seen, and man this one is great. It’s so fun to see Homer and Marge’s fist months of marriage, and it’s legitimately moving. It’s probably the most moving of the flashbacks that I remember. Some heavy shit happens in this episode. Homer abandons Marge and the unborn Bart because he can’t support them, and feels like he’s just dragging them down. Jesus, that’s dark. But things work out great, and Homer proves his worth as a husband and a father. Plus, the proposal scene is the sweetest thing ever. So good.

Take Away: Don’t abandon your pregnant wife. Even if you’re hard up for cash, that’s not a good plan. Problems in a marriage should be worked out together, not by flying solo.

Tagged as: I Married Marge, Lifetime of Simpsons, Season 3, the Simpsons