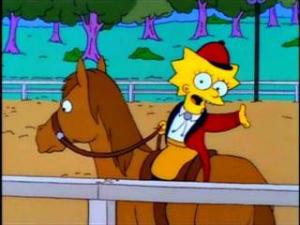 Aw, a very sweet father-daughter episode. I can’t help feeling that episodes like this will mean a whole lot more when I actually have kids, but it’s still pretty impacting. We start right off with a weird 2001: A Space Odyssey reference with the dawn of man scene. And while all the other apes start to get intelligent, the Homer ape just uses the Monolith as a chair. But it turns out that’s all a dream, and Homer gets woken up at work by a call from Lisa. She’s in a talent show later that evening, and needs a replacement reed for her saxophone, and because like ten other people who were more reliable for her couldn’t help she asks Homer to get it for her. So Homer writes down a reminder on his shoes, and gets back to his work nap.

After work he rushes off to King Toot’s music store, with just a few minutes left before it closes…but it turns out King Toot’s is next to Moe’s so of course Homer needs to stop in for a beer first. We pop over to the school to look at some of the terrible talents the kids at Springfield Elementary have. We see Milhouse playing the spoons, Bart doing terrible impressions, and some random kid singing about his ding-a-ling. I also love that the judges for the talent show are Willie, Lunchlady Doris, and Bleeding Gums Murphy. And that Murphy likes Bart’s bad impression of Principal Skinner. Back at the bar Homer finally decides to go get the reed, but King Toots is closed now. He comes back to Moe’s, furious, and insulting the owner of King Toots who is in the bar. He gets offended, and refuses to open the store of Homer, until Moe mentions that the guy owes him one since he pulled his wife and his bodies from a burning car once. Good work Moe. Homer goes to King Toots, but quickly realizes that while he has the reed size down, he doesn’t remember what instrument Lisa plays. He finally remembers, and gets the reed, then runs off to school to save the day. Unfortunately he’s just a few minutes too late, and Lisa has had to go up with her broken saxophone, and performs in from the of the whole school, sounding terrible. She’s even crying while performing which is so incredibly depressing. 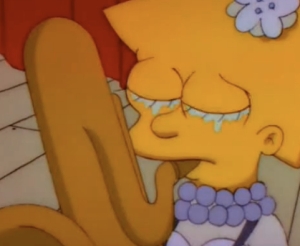 Because Homer made her humiliate herself, Lisa is pissed at Homer. He initially tries to fix things by buying her the biggest ice cream sundae of all time, but that doesn’t quite work. We then get a super sad scene of Homer watching baby videos of Lisa, and realizes that he missed all her important moments growing up, and that he’s been a generally bad father to her. He decides to act like a better father, but that doesn’t work out very well. He has a tea party with her, helps dry her hair, and pushes her on a swing, to disastrous results. Homer then gets really frustrated, and decides that he wants a quick fix, which would be to get her the pony that she’s always wanted. Marge of course shoots the idea down, but Homer is a weasel, so he heads right out to get a pony the next day. But sadly ponies are very expensive, and there’s no pony pound, so goes to get a loan from the Power Plant’s credit union. For some reason Mr. Burns and Smithers personally approve loans, and after making sure Homer doesn’t know what the word usury means, he sets Homer up with a loan with a crazy interest rate.

So Homer goes a gets Lisa a pony, and after sneaking it into her bed like the Godfather, she comes galloping into Marge and Homer’s bedroom thanking Homer. She names the pony Princess, and absolutely loves it. Marge is obviously mad, and starts to think realistically pretty quickly. Her main concern is what Homer plans to do with Princess, and his solution is brilliant. During the day it’ll wander the neighborhood, and at night it’ll live in the garage between the cars. But Lisa and Marge don’t care for that plan, so Princess ends up getting a stable, and Lisa gets riding lessons. There’s then a quick throwaway scene that’s kind of pointless, but I loved it. Grandpa is playing a video game while Bart judges him, and after Grandpa fails he gives the amazing line “I got down on the floor for this?” It’s so funny and pointless. Anyway, turns out that the family’s financials aren’t doing very well thanks to the pony, so Homer decides he needs to get some money.

He goes to the Kwik-E-Mart and after he tries to scam Apu by lying about a scratch lottery ticket, but that doesn’t go well, and instead Homer gets a job working the late shift, midnight to 8 a.m. Apu gives him some great advice about getting shot, and lets him in on all the secrets of the Kwik-E-Mart. Homer’s life then starts to get terrible as he works all day at the plant, and then gets to his Kwik-E-Mart job, sleeping fifteen minutes a day. But for a while it’s worth it, because Lisa absolutely loves Princess, and stays up with her in her stable, playing music for her. But Homer quickly stars to fall apart thanks to this schedule, and starts falling asleep constantly. He even falls asleep while driving, and has this weird Winsor McCay, Little Nemo dream sequence. But Lisa finally finds out that Homer is working two jobs to keep Princess, and that it’s killing him, so she decides to get rid of the pony, saving her father. She comes to the Kwik-E-Mart to tell him, and they have a sweet scene. “there’s a big dumb animal I love more than that horse.” “Aw, it isn’t a hippopotamus is it?” Homer then quits, and walks off into the morning with Lisa.

This was a really cute episode. I love seeing Homer and Lisa’s relationship, since they’re such fundamentally different people, but they still love each other no matter what. Their relationship gets tested almost as much as Homer and Marge’s, and it’s always nice to see Homer do whatever he can to be a better dad. Yeah, the pony thing wasn’t a good idea, but it really showed that Homer loves Lisa with all his heart, and wants to make her as happy as he can.

Take Away: Be present in your kid’s life. But also, don’t just try to buy their love, it takes actual effort. And on the flip-side, cut your parents some slack, they’re doing the best job they can.

Tagged as: Lifetime of Simpsons, Lisa's Pony, Season 3, the Simpsons