Halloween time everybody! There’s a lot to unpack in this episode, so let’s dive right in. I love that we start with another plead from Marge not to watch the episode. She explains that the episode is even worse than last years, but becomes fatalistic, realizing that no one will listen to her, so the episode starts. I think the best tombstone we pass this year was “Bambi’s Mom.” That one made me laugh pretty hard. We also get a good frame story this year, where the kids come back from trick or treating, and eat too much candy, resulting in the nightmares that we get to see. I love that Bart dressed up as an executioner and that Lisa is a totem pole, possibly the most Lisa thing anyone could dress up as for Halloween. So the kids gorge themselves on candy, and we get our first nightmare. 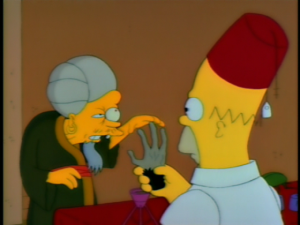 First up is Lisa’s nightmare, a parody of the classic short story. The family is visiting Morocco for some reason, and Homer wanders off to a sketchy souvenir stand, where he finds a dried up monkey paw. Homer buys it after the weird dude who works at the stand tells him that the monkey paw grants wishes. I love the gag of Homer pointing out the stand, initially assuming that it vanished, before he sees that it’s just to the left. The family heads back to Springfield after a brief and strange Midnight Express reference. The family then begins bickering about what they should wish for, and Maggie steals the paw, wishing for a new pacifier that gets delivered by a limo for some reason. And while they’re wondering about Maggie’s wish, Bart grabs the paw and wishes the family would be rich and famous. But that wish backfires and people quickly become annoyed with the Simpsons antics, in a weird meta-commentary on the success of the show. When the family starts to get frustrated with their fame Lisa grabs the paw and wishes for world peace. Her wish starts out pretty good, the whole world gets rid of their weapons and become hippies, but then Kang and Kodos invade earth. They pretty quickly take over the world wish just a club and slingshot. In the face of the world now being run by aliens, Homer takes his last wish very seriously, and orders a turkey sandwich. So then Homer throws the paw away, and Flanders takes it. He then quickly saves the world, getting rid of the aliens and making his house a castle. I love that Kang and Kodos have a weird monologue about the Earthlings destroying themselves with bigger and bigger boards with nails in them. Commentary!

In between nightmares we see Lisa wake up, terrified, and go sleep with Bart. But Bart requires payment in the form of a candy necklace. Then we get Bart’s nightmares.

This nightmare is a great reference to the classic Twilight Zone episode, “It’s a Good Life.” It’s a pretty straight forward homage to the episode, except without the weird cornfield stuff, and even starts off with a faux-Rod Serling narration. Bart has magical powers and is able to do anything he wants after an accompanying bongo solo, and the whole town lives in fear of him. He demonstrates his powers by turning Snowball II into a monstrosity, and I love the line “It’s good that you made that awful thing Bart.” We then just see Bart go around town, living like a god. He gets to change American history to correlate with his answers on a test, where America is now called Bonerland. He calls Moe up and has him just say horrible things about himself without the need for a pun, and after Homer has the gall to make Bart watch football he makes Homer vanish and turn into the ball live on TV. He also is apparently forcing Krusty to never get off the air, even when Bart isn’t watching the show, which is making Krusty go insane. But Homer gets back from the football game, and tries to smash Bart’s brains in, but Bart catches him, and turns him into a giant Jack-in-the-box. The story then takes a weird turn where Homer and Bart go see Marvin Monroe, and start to try and bond. They play catch, go on a roller coaster, and just generally do father-son stuff. Then after a sweet day where the two have started to enjoy each other’s company, Bart turns Homer back into a human, and they hug and say they love each other. Cut to Bart waking up screaming.

So Bart and Lisa leave Bart’s room, and come sleep with Homer and Marge after Homer ensures they’re potty trained. Then we close out the episode with Homer’s nightmare.

If I Only Had a Brain

This is definitely the wackiest of the three nightmares, probably because it features Mr. Burns. Homer gets fired from the plant because he’s sleeping on the job, and we learn that Mr. Burns has made a giant robot worker that he wants to replace everyone in the plant. But it needs a human brain. Homer becomes a gravedigger employed by Groundskeeper Willie, and he decides to take a nap in a fresh grave. Then Burns and Smithers show up looking for fresh corpses, and they take Homer. When Homer starts protesting, Mr. Burns just whacks the sack they keep Homer in with a shovel until he stops making sounds. They bring Homer back to their secret lab and cut his head open super easily, then rip his brain out with an ice cream scoop. Burns then becomes Dr. Frankenstein as he brings the robot to life. “That fellow at Radioshack said I was mad!” But sadly the robot has Homer’s work ethic, and it runs off to eat donuts. Burns decides the robot was a failure, and he takes the brain out of the robot, and puts it back into Homer. Burns then takes out his aggression of the robot, which falls down on him, crushing his body.

Homer wakes up from his nightmare, and heads off to go pee. But then it turns out that his dream came true, and Mr. Burns’ head has been sewn onto his shoulder, making them look like The Thing With Two Heads. We then get a weird “Next week on the Simpsons promo,” where Homer still has Burns’ head on his shoulder, and they have wacky misunderstandings. We then get some great examples of the cast and crew having “scary” names while the awesome Halloween theme song plays. 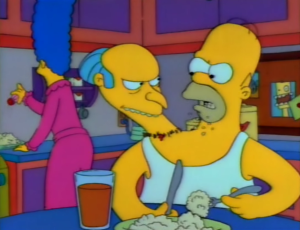 Take Away: Don’t trust Moroccan monkey paw dealers, don’t take advantage of your magical powers, and always check the freshness of your corpse before you steal it to make a robot.

Tagged as: Lifetime of Simpsons, Season 3, the Simpsons, Treehouse of Horror II