Ah, the terror of nuclear power. Man does watching this show make you fearful of nuclear energy. I feel like it’s not supposed to be that dangerous of a power source anymore, but if you take the Simpsons word for it, plants should always be imminently getting ready to explode, and leaking nuclear waste constantly.

We start off the episode by showing Bart signing a birthday card for Milhouse, that features a woman in a bikini, and was marketed by Krusty. I love that Bart is legitimately trying to write a sweet card for his friend. So he gets on the school bus with his card and gift, but he then finds out that Milhouse had a raging party that weekend, and invited everybody but Bart, even Otto. Apparently Milhouse’s mom doesn’t want Bart and Milhouse to be friends anymore, so he didn’t get to go to the party. Bart’s crushed, and ends up staying on the bus as Otto drives away from the school, and stops at the Kwik-E-Mart. And apparently Otto was planning on going to Mexico, and would have taken Bart with him if Apu hadn’t noticed.

But that’s the B story, over in the A story, Homer is at work, getting ready for the day, and starts napping in his office after eating a donut and spraying purple goop over the controls. And then something terrible starts happening with the core, and the only person who can stop it is Homer. So the town is doomed. The town starts to hear about the impending disaster, and Mr. Burns starts being interviewed by the local news. I love that his stock photo has a terrible toupee. He assures Kent Brockman that everything is fine, while everyone in the plant is freaking the hell out due to the “unrequested fission surplus.” Homer realizes that it’s all up to him, and after briefly trying to read the manual to figure out what to do, he quickly gibes up. I love the weird dictionary gag that keeps coming up in the episode where Homer’s name and picture gets associated with words, in this case Stupid. But then he just plays eeny, meeny, miny, moe and presses a random button that just happens to solve everything.

Because Homer saved the town and the plant, he becomes employee of the month. We pop in for a second to Bart’s story, where Milhouse finally tells Bart that he’s not allowed to spend time with him anymore, and it’s so cute that Bart offers to pay Milhouse’s allowance in exchange for ignoring Luanne’s orders. Back at the plant Homer is getting his employee of the month prizes, which include a ham, a plaque, a coupon book, a thumbs up from Mr. Burns, his picture hung up on a wall, and a personal phone call from Magic Johnson. But Homer quickly starts to feel guilty about everyone loving him, when he knows that it was all a fluke, and the town should have been destroyed. And the feeling continues at home when Lisa starts worshiping him for his “bravery.” 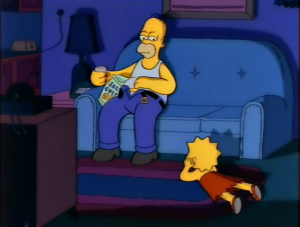 And things start to get really bad when Mr. Burns introduces Homer to another crazy Jon Lovitz character, Aristotle Amadopolus, the owner of the Shelbyville Nuclear Power Plant. Aristotle wants Homer to come give his employees a speech about remaining cool under pressure. Homer’s fretting about this speech, we check in on the B plot, where Bart had decided he’s going to make Maggie his new best friend, which is adorable. They even play Monopoly together despite the fact that Maggie is eating the hotels, and Bart suggests they go throw rocks at hornet nests. Marge realizes that Bart needs Milhouse, so she goes and talks with Mrs. Van Houten, and she defends all of Bart’s shortcommings, and makes her realize that the two boys need each other. And just like that Bart gets Milhouse back in his life, and thanks Marge, knowing that Marge was the one to defend him because “who else would?” It’s a super sweet scene, because everyone tells Bart that he’s a bad kid, but he knows that Marge will always defend him.

Homer continues to fret about the speech, while Lisa is following him around, even to Moe’s where Barney is ranting to her about how untrustworthy carnies are. Kids really shouldn’t be in Moe’s, and especially shouldn’t talk to Barney. That’s just a bummer. It’s kind of like when I was a kid and we would visit like, the Elks club or some place that my Great-Grandpa went to and saw the old alcoholics. Yikes. But Homer has to suck it up and go talk to the workers at Shelbyville. But right in the middle of his speech another core meltdown happens, so they of course expect Homer to save the day again. And when it turns out he uses the eeny, meeny, minny, moe method again everyone realizes that he has no idea what he’s doing. But miraculously it works again, so Homer has now saved two towns from nuclear oblivion based on a children’s method of picking things. He’s then revealed to be the fraud that he’s been worried he was the whole episode, and yet still becomes famous. We get one last dictionary gag where we see that pulling a Homer becomes a term for accidentally do something right, or to “succeed despite idiocy.” So that’s something.

This was a weird one. The stuff with Bart and Milhouse was really sweet, especially Marge standing up for Bart, but the Homer stuff kind of landed flat for me. It was just kind of a weird premise. I liked seeing Homer succeed accidentally, but I think the downfall was having him do it again. The episode was most interesting when everyone was praising him, and he was feeling guilty. I don’t know, just wasn’t all there for me.

Take Away: Eeny, Meeny, Miny, Moe is a perfect way to solve your problems. Your mom always has your back.

“Homer Defined” was written by Howard Gerwitz and directed by Mark Kirkland.