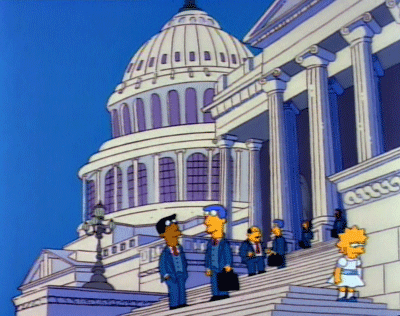 Well what do you know? A Lisa episode that didn’t do it for me. Kind of like “Homer’s Odyssey,” I completely forgot about this one. Now, as a kid I remember liking most of the Lisa episodes, which I know is odd for a lot of males my age, who usually found them to be the boring one, but I do remember not liking this one as a kid. So I figured that maybe now that I’m older, and can appreciate the emotion in the episodes, I would like this one. Turns out that’s not the case. I didn’t hate it or anything, but this felt like such a nothing episode to me.

We do start off with a pretty funny joke where Homer is mocking his junk mail as he throws it away, until he finds one that seems to be a check for a million dollars. So he runs off to the bank to cash it before the teller demeans him by pointing out all the obvious signs that it’s not a real check, and he has to leave having made an ass of himself. But on the bright side, they got a free copy of Reading Digest, and Homer shockingly falls in love with the magazine. He then becomes a pompous ass about it, and mocks everyone who isn’t reading it, which is great. Homer reads the family a story to have bonding time with the family, gives Marge a recipe for Meatloaf-men, and even find tips for spicing up his romance. But he finally reaches the end of the magazine, and throws it away, just in time for Lisa to learn that there’s an essay contest for children about America, that will give the winners $10,000 and a trip to Washington DC. Lisa gets excited, and writes one with the topic of “What would Ben Franklin think of America if he were alive today?” But she unfortunately is suffering from a bad case of writers block, and begins to doubt her writing skills, which is totally relatable. That’s pretty much why this blog exists, to combat writers block. I also love the brief interlude with Marge where she’s worried she doesn’t know what’s cool, or even in cool is the right word to use anymore, which made me laugh at as a kid, but I totally get now. I have no idea what my younger cousins are talking about half the time with all the new slang that crops up. Anyway, Lisa goes to Springfield National Forest for some inspiration, and after seeing a bald eagle land on a branch and impersonate the National Seal, she gets to work. 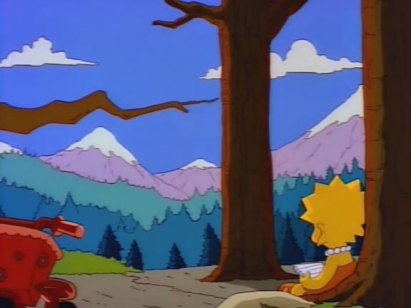 We then get a quick montage of other kids around the country reciting their weird essays to see Lisa’s competition, before coming back to Springfield so she can read her essay. We also get to hear the end of Nelson’s insane one about flag-burning, which makes Homer cheer. Lisa pours her heart out, and the judges of course think that Homer helped write it because it’s way outside the talents of a normal eight year old. But after a quick conversation with Homer, the judges award Lisa extra points because having Homer as a father is clearly a determent. So the Simpsons are off to Washington DC! And boy was it hilarious to see Homer demand all the free stuff he gets on a flight, when nowadays we’re lucky to get a half can of soda on most major airlines. Anyway, the family gets to the DC, and Homer’s first mission is to boo at the IRS building, which I do every time I’m in DC now. They get to their fancy hotel room, where Homer is amazed at the amenities, such as the shoe horn, “Shoe goes on, shoe goes off, shoe goes on, shoe goes off.” I also think it’s fun that Bart and Lisa get their own room, and that Bart messes with Lisa by implying that there’s something wrong with the bed she chose. Man this show understands sibling relationships.

The next morning the family goes down to the Reading Digest contest, where they find out they get to be VIP’s, and after the lady has to teach Homer what VIP means, they head out to explore the town. I love that Lisa is happy to be around the other smart kids, finally being among peers. Their first stop is the White House, which has protesters standing outside with signs saying that everything’s fine, which was legitimately hilarious to me. They then get to have an in depth tour of the White House, even getting to talk to Barbara Bush while she was in the bath tub. I also adore that it’s Marge who giggles at the Washington monument, and obviously makes a crude joke to Homer, even though she just whispers it in his ear. But then the message of the episode starts up, and we cut to the Senator of whatever state the Simpsons live in, who is in a meeting with a lobbyist from the logging industry, and he’s trying to give a bribe to the senator so that they can log the forest. Unfortunately Lisa comes in before the bribe can happen, so they agree to meet at a pre-designated location. The Senator then takes some pictures with Lisa as a publicity move, which he readily admits. But that night Lisa gets too nervous to sleep, and heads out to wander DC at like, 3 in the morning, which was shocking at first, but she does have a good track record of meeting kindly old mentors while wandering around at night, so I guess it’s okay. She goes to a monument for a women’s rights activist, Winifred Beecher Howe, who she finds inspirational. But it turns out that that’s the place the Senator likes to get his bribes at, and Lisa witnesses political corruption first hand, instantly shattering her faith in America. 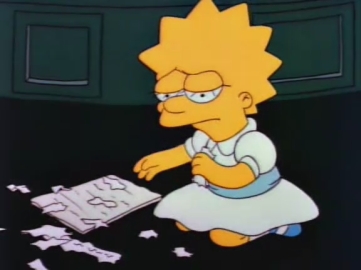 While trying to come to terms with what she saw, she tries to go to the Lincoln Memorial to ask the statue for advice, which seems weird to me, but there were a lot of people there doing the same thing, so I guess it makes sense in the Simpsons’ universe. When Lisa can’t get an answer, she heads to the Thomas Jefferson memorial, which is empty, and that statue does talk to her, but he’s super passive-aggressive, so she leaves. She then wanders around DC while seeing the whole city as a weird political cartoon where everyone’s Fat Cats or pigs trying to eat as much as they can.

Back at the hotel, Homer and Bart are enjoying the perks of an all expenses-paid trip by abusing room service, getting massages while ordering all the food they can. Then the family heads down to the essay contest, except Lisa who still hasn’t show up. There’s a weird guy playing piano at the contest, who I think is supposed to be a parody of Tom Lehrer, but I don’t really get why they paint him in a bad light and have Bart hate him. Have you heard Tom Lehrer stuff? That guy is hilarious. Anyway, the other kids read their essays, and then Lisa shows up, with her new essay that’s all about the rampant corruption in DC politics. Everybody in the audience, except Bart, is horrified by Lisa’s story, and it sends an aide out to call the senator he works for, and it ends up causing a domino effect that gets the Springfield senator fired and jailed, in the span of like, an hour. Lisa ends up losing the contest, but leaves DC with the knowledge that she helped end a corrupt politicians career, and her faith in the system restored.

This is just such a weird episode. The first half is pretty fun, with Homer loving the Reading Digest and the family exploring DC, but then it got really strange. The Simpsons is usually a pretty cynical show when it comes to politics, and the ending seemed so weird to me. I don’t think we’re supposed to take it seriously, it was so ludicrous that it had to be satire, but it still seemed weirdly earnest, like the moral of the episode is supposed to be that it is possible to take care of corruption, which doesn’t seem very realistic, or Simpsony. It was just strange. It seemed like too happy of an ending. Whatever.

Take Away: Politician are corrupt. I’m going to ignore the ending, because I really don’t agree with it.

“Mr. Lisa Goes to Washington” was written by George Meyer and directed by Wes Archer.

Tagged as: Lifetime of Simpsons, Mr. Lisa Goes to Washington, Season 3, the Simpsons