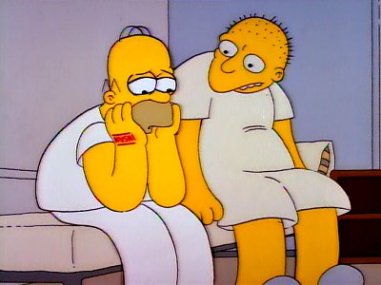 Well, Season 3 starts off with another amazing sibling episode, and a great guest appearance. That’s right, the Leon Kompowsky! It’s also a really weird episode about conformity and insanity. Let’s jump right in. We start with Lisa waking Bart up by pinching his nose and having him struggle to breathe, which is such a sibling move. Bart then assumes that the reason Lisa woke him up was that Homer was dead, and he’s shocked that he’s relieved Homer’s okay. But it turns out that the reason Lisa has woken him up is that Bart never gets her any birthday presents, never even seems to acknowledge her birthday, and she’s desperate for him to actually give a damn, and he says that he will. Which seems like a strange thing, to me at least. My brother and I only started buying things for each other on birthdays a year or two ago, definitely not when we were kids. Anyway, we cut down to the kitchen, where it turns out all of Homer’s workshirts have become pink, because Bart put his lucky red hat in with the whites. Homer is terrified of wearing the shirt to work, thinking that everyone will make fun of him for wearing pink. But Marge convinces him that everything will okay. 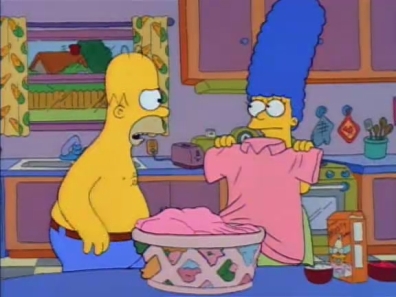 But when he get’s to work it turns out that Homer was exactly right, because Mr. Burns is watching all the employees come in, and immediately spots Homer, and has him brought to his office, because clearly anyone not wearing white is a “freethinking anarchist,” something he will not stand for. So Homer is dragged to some weird cell and interrogated by Burns, Smithers, some goons, and Dr. Marvin Monroe, who is in this show way more than I remembered. Monroe says that he thinks something is wrong with Homer, and gives him a personality test to take at home and turn in. So naturally Homer tries to pass the buck, and asks all the other family members to do it for him. Marge flat out says no, Lisa says she will, but only if Homer listens to her crazy poem. “I had a cat named Snowball, She died! She Died! Mom said she was sleeping. She Lied! She Lied!” And Homer decides it’s not worth hearing the rest of the poem, so he goes to Bart, and Bart agrees to do it pretty quickly. But Homer is an idiot, and Bart fills it out terribly, especially since Homer is being rude while Bart works on it, so when he turns it in Monroe declares that Homer is hardcore crazy, and is sent to a mental institute, because apparently Homer’s work can commit him? Whatever, they kind of glossed over that.

Homer gets to the mental asylum, and is initially doing well because he apparently passes all the ink blot tests, until one looks like Bart, and he blows up. So they send him to a cell with a large, fat, white guy who introduces himself to Homer as Michael Jackson. And yes, it’s really voiced by Michael Jackson, since this was 1991 he was still an eccentric weirdo everyone loved…not quite what he became, so at the time it was a super big deal to have him voice a character. Turns out Homer doesn’t know who Michael Jackson is, so he just rolls with this large guy who speaks in a soft high pitched voice and sings a lot. They bond pretty quick, and Michael even tries to teach Homer how to moonwalk. The two become fast friends and Michael takes him around the asylum, which is pretty much just One Flew Over the Cuckoo’s Nest, complete with a large, mute American Indian man. Homer finally decides that he can call the family, but he’s too scared, so Michael does it for him. But he gets Bart, who is more interested in the fact that Michael Jackson is calling him than the fact that his father has been committed. He dances into the kitchen and lets Marge know where Homer is. She immediately calls the asylum, and I love that the hold music is “Crazy” by Patsy Cline.

Back at the asylum Homer and Michael continue to bond, and Michael helps him fall asleep on the first night in the asylum by singing the song Ben, which is kind of a strange choice. That song is from a movie about evil rats. Weird. The next morning we get more fun asylum stuff, like Homer being in group therapy and making fun of the other inmates. But then Marge shows up and convinces the warden that Homer isn’t insane, and isn’t a threat to anyone, although he is shocked that Bart is a real person, and not some manifestation of Homer’s paranoia. So Homer is released, and even gets framed certificate that says “Not Insane.” Then when he says goodbye to Michael, it turns out that he’s there voluntarily, and decides to leave with Homer, who is more than glad to let him crash at the house. So Homer calls Bart to let him know that they’re coming home, and bringing Michael Jackson. So of course Bart calls Milhouse, and the rumor quickly spreads all around town, until a goddamned press conference around the Simpsons house, complete with Mayor Quimby who is going to rename a road to Michael Jackson Expressway. We also find out that this day is apparently Lisa’s birthday, and everyone forgot so she sings “Happy Birthday” to herself before weeping. At least Maggie cuts the darkness by blowing a party horn. Anyway, everyone is excited that Michael Jackson is coming, until the car pulls up, and they see that it’s a giant fat white guy. And the whole town gets instantly furious, especially at Bart, who has already been hated by the entire town twice now. Then to put a cherry on top, Lisa comes out and is livid with Bart for forgetting her birthday and breaking his promise. 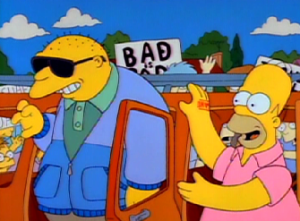 Lisa is incredibly mad at Bart, even writing him a letter saying that they’re siblings in name only now, and Bart is frustrated, because he clearly doesn’t want Lisa to be mad, but doesn’t know what to do. And then Michael comes to rescue! He suggests to Bart that they write a song for Lisa, and after some complaining on Bart’s part, since it’s not the real Michael Jackson, he agrees, and the two get to work. It’s clear that Bart needs help, because the initial song he writes, while hilarious, is terrible. “Lisa, her teeth are big and green, Lisa she smells like gasoline, she is me sista, her birthday, I missta.” So they stay up all night, with Michael doing most of the work, but Bart giving some great input, mainly about what it’s like being 8 years old, and what it’s like to have her in his life. Then the next morning they drag the piano up to Lisa’s room, and after Bart wakes her up by plugging her nose like she did, they start playing the song. And man is “Lisa it’s you Birthday” an adorable song. And it was in my head like crazy after. It was a beautiful moment. And while they’re singing the rest of the family wakes up, including Homer who is apparently sleeping with his “Not Insane” certificate. They all come to listen, and Lisa loves it, jumping to Bart to hug him. Then, like magic, Michael Jackson is gone, and the true man, Leon Kompowsky is back. He admits that he had a nervous break, and started acting like Michael Jackson, but he’s apparently cured now, and heads out on his own, happy that he helped fixed Bart and Lisa’s relationship. 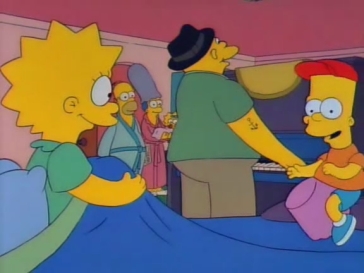 This is such a great episode, and such a strong season opener. It didn’t pack quite the emotion impact that “Bart Gets an F” did, but it’s still amazing. I love the way that this show builds Bart and Lisa’s relationship. I just had a younger brother, so I don’t quite know the dynamic of having a little sister, but I imagine it can be a minefield. The show really portrays their highs and lows beautifully. Plus all the psych ward stuff was great. A little stereotypical, but super hilarious. Homer was such an asshole in the mental ward, and every minute was great. And then there’s Michael Jackson. I loved his role so much. It’s such an amazing way to make the use such a famous person. Just make them be a crazy person who think they’re the celebrity. It’s so great. And seriously, “Lisa It’s Your Birthday” is an amazing song, and everyone should give it a listen. As a side note, I feel like I should check out the Simpsons CD’s that came out around this time of the show. I had Simpsons Sing the Blues and the Yellow Album as a kid, and I remember liking them…but I’m curious how they’ve aged. I may have to do a special article about them.

Take Away: Don’t be a crappy sibling. Similar to the recurring moral of “Don’t be a crappy spouse.” Oh, and just because you meet a guy claiming to be Michael Jackson and he turns out to be a crazy white guy, it doesn’t mean that he can’t help you write a song.

“Stark Raving Dad” was written by Al Jean and Mike Reiss and direted by David Silverman.