The Depressing Dystopia of Brazil

Dystopia’s have always been an interest of mine. I think it’s fascinating that we not only come up with horrible scenarios of our future, but we also have so many different types. Dreaming up these dreadful visions of the future let humanity examine their present situation, and also shows us what the future could hold, so we can do our best to avoid it. We’ve had nuclear wars, deadly viruses, ecological disasters, alien attacks, and countless others. But one of the most popular and enduring dystopic fantasies of all time is that of the domineering government. Stories like George Orwell’s 1984 and Alan Moore’s V for Vendetta show us what a world would be like when an oppressive, autocracy ran a majority of the world, and how people’s lives would become. Terry Gilliam’s 1985 masterpiece Brazil takes this concept, and subtly twists it. The world in Brazil is ran by an oppressive government, but where the real dystopia comes from is the bureaucracy that the government creates. Nothing can be done without the proper paperwork to back it up, even the arrest of a supposed terrorist requires the signature of the accused, and a receipt for his wife. No one has the guts to do anything in this world, because of all the hoops they would need to jump through, so nothing gets accomplished. The populace isn’t kept in place through fear and pain, but through apathy. They’ve created a world where no one cares about solving the problems of the dystopia, letting it run rampant. And honestly, it creates one of the most probably dystopia’s I’ve ever seen.

Brazil’s plot is similar to man dystopic stories. The protagonist is a lowly government employee named Sam Lowry (Jonathan Pryce), and essentially chronicles his search to fix a clerical error. It appears that the government arrested an innocent man named Buttle in their hunt for a terrorist named Tuttle, and it’s up to Sam to fix this problem. Things get complicated however when they learn that the innocent Buttle has be executed for his supposed crimes. Sam has to go inform Buttle’s family of the tragic mistake, and in the process meets a woman named Jill, who is quite literally the woman of his dreams, having appeared to him nightly for some time. Sam tries to talk to Jill, but since he works for the government, she doesn’t trust him, and rejects his advances. Around this time, Sam attempts to have the government come fix his air conditioning, but finds the bureaucratic system too difficult to navigate. He’s then contacted by the elusive Harry Tuttle (oddly enough played by Robert DeNiro), a renegade repairman whose operating outside of the law. Tuttle fixes Sam’s air conditioning and escapes into the night. 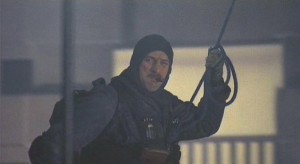 Sam continues to dream and obsess over Jill, and learns that the only way to truly find her again is to accept his mother’s help in gaining a promotion in the government, a prospect which repulses him. But Sam accepts the promotion for the greater good, and begins work in the Information Retrieval division of the Ministry of Information. He finally tracks down Jill, and convinces her that he’s not a fan of the government, and wants to be with her. However, he also finds that she’s wanted by the government, considered a possible terrorist. He uses his new found powers in the government to falsify documents making it appear that Jill had died, so they would stop hunting her. However, shortly after the two share a romantic evening, the government comes for Sam, thinking him to be involved with the terrorists. He’s almost tortured by a friend of his, Jack (Michael Palin), until he’s suddenly rescued by Harry Tuttle and the freedom fighters. Sam starts to have surreal visions, his dreams coming to life, witnessing Tuttle evaporate, his mother’s friend die, and she herself become rejuvenated. Eventually, Sam breaks through his delirium and finds himself in the unspoiled countryside, away from the government with Jill beside him, ready to live a happy life. But as the film concludes, we find that the entire last scene was all in Sam’s head, the stress of his life and torture driving him mad, forever locked in his own mind.

I just adore the bleak style to this movie. Terry Gilliam really does his best to create a dismal, believable world for his characters to inhabit. We’re never given a definite time frame, or even location of this movie, but it doesn’t really matter. This movie exists in it’s own reality. Everything is just so detailed, really making this world come to life. Even subtle touches like the propaganda posters that randomly litter the world really show how much Gilliam strove to make this world real. You get a serious feeling for the government and society depicted in this movie, making it all the more poignant. I also love the design of this movie, creating a strange world that seems to take place in the future, but the past at the same time. It’s like the noir culture of the 30’s and 40’s came back into prominence with this new government, making it so that all the men in this world walk around in trench-coats and fedoras, with a kind of hazy smokey feeling lingering everywhere. Sam’s obsessed with watching old black and white films on the government’s time, and the movie really manages to recreate a feeling of those noir movies, without abandoning the futuristic feel as well. Everything’s just so dirty and large, making this government seem so huge and unwieldy. You can’t escape from it, but you also can’t work with it. You’re damned if you do and damned it you don’t.

The design of this movie is amazing. I’ve really never seen a world quite like it. Gilliams really dives in, making a world that seems real. The film is filled with remarkably subtle touches that are almost impossible to notice the first time you see it. There are so many gags and jokes that hidden in the background, and even the foreground that you’ll notice over time, adding new layers to the movie. Things like the walls being covered in propaganda or the strange habits of the other people in the movie really lend the film a realistic tone. There are fantastical elements in the movie that show you this isn’t our world, but at the same time there are things that come straight from our world, showing us that this could be us in different circumstances. The dream sequences are amazing too, showing Sam’s attempts at finding a free, fulfilling life outside of the oppressive government. But every time there are dark agents of reality ready to drag him kicking and screaming back to his waking nightmare.

It’s also amazing to me how dark and funny this movie can be. The humor of the film really comes from the absurdity of it all. The strange, overly complicated nature of the technology in the movie is a rather standard gimmick in dystopias. It’s a jab at modern technology by showing how ridiculous the technology of the future will surely be, to the point where it’s more work than it’s worth. You can’t help but laugh at how ridiculous this world becomes, from their fashion trends, to how oblivious they are to a terrorist attack occurring while they eat lunch, even to how flippant they can be when it comes to torture. This is the world they live in, it’s beaten them down, made them to apathetic to change anything, they just go with the flow. And it’s that sentiment that the darkness in the movie comes from. The movie just constantly pounds Sam in submission, showing him that this is the way life is, there’s no escape. Even when Sam makes it out of the dystopia, into his own personal utopia, the only way he got there was through his own insanity. Death or insanity is the only way out of this world. It’s a bitter, hard to swallow ending, which really doesn’t surprise me that Hollywood wanted to change it, make it more happy and palatable. But happy endings just aren’t how Terry Gilliam, and sadly life, roll.