Why Stranger Than Fiction is Amazing

This 2006 dramedy is mind blowing to me. It’s just so quirky and clever, that I’m rather jealous of it. The cinematography, the acting, the casting, the dialogue, it’s all amazing. But it’s that plot. The plot of this movie is amazing. As soon as I saw the trailer for this movie, I knew that I was going to love it. I’ve always wanted to be writer, coming up with a multitude of stories throughout my life. And the idea that a character could be real, that your imagination has actually created some person, or at least taken control of a previously alive person, was fascinating to me. First of all, I love any time literature and books in general are made the focus of a movie, it’s just a topic that movies seem to shy away from, really looking at the literary world. And second, I think it just speaks to anyone who has any sort of creative impulses. What if the world that you imagine, be it books, movies, art, anything really, was real. What if the lives that you were creating and destroying actually existed? This movie looked at this concept in a really brilliant manner, and I love it for that. It also surprised me, because going into this film, I definitely didn’t expect it to be so dramatic. That trailer, and the inclusion of Will Farrell led me to expect it as some sort of high concept comedy, just a normal Will Farrell movie with a more intelligent script. But the movie took a darker, more dramatic twist, that had me hooked from the beginning.

This was the first time I’d ever really seen Will Farrell play anything other than his typical loud man-child character. I know that it’s become something of a trend for comedic actors to try out their acting chops recently, with mixed success. Jim Carey did good in movies like Eternal Sunshine of the Spotless Mind and Man on the Moon, but movies like the Number 23, didn’t really work as well. Steve Carrell and Adam Sandler have also recently tried this concept, moving out of their comfort zones. And Will Farrell pulled it off perfectly. He subdued his usual buffoonery, and pulled off a legitimately good performance, understated and subdued, really something I never expected him to be capable of. The entire cast in this movie is amazing, from Emma Thompson, to Dustin Hoffman, to Maggie Gyllenhaal, but it was Farrell that really stole the show for me, because you really believe him in this movie. I didn’t question that he really was depressive, lonely IRS agent Harold Crick throughout this movie. Little scenes in this movie, like Harold going and seeing the psychiatrist and the Human Resources worker really become hilarious, and his lack of real concern to the fact that he hears this narrator voice in his head shows his utter lack of imagination, that will start to grow through this movie as he becomes more of a real character and human being.

I think my favorite thing about this movie, is the inclusion of Dustin Hoffman’s character. It was a move that seemed so obvious after it happened, but one that I don’t think I would ever have been able to come up with. If you’re hearing a voice in your head that appears to be telling a story, go ask a professor of literature what’s going on. Of course! And Hoffman’s professor Hilbert is one of the best performances that I’ve ever seen. He’s so cynical and dry, treating Harold’s apparent mental problems as a fun game, something for him to poke and prod at. The scenes where the two of them sit in his amazing office trying to figure out what kind of story Harold is in are brilliant. And of course, it’s his idea that Harold should go about his days, trying to decide if he’s in a Comedy or Tragedy that ultimately bring Harold into the romance with the eccentric baker Ana. This exercise of determining if your life is a Comedy or Tragedy is a fascinating concept this film brings up, and one that I think most people would be shocked to find out where they fall.

As I’ve watched this movie, there’s something else I’ve began picking up on, something that I haven’t really brought up  yet. The sets and cinematography in this movie are amazing, and really something to analyze. As the movie went along, I began to notice things about the primary sets given to the four main characters. Harold’s life is portrayed as being a bland, monotonous existence, little to no surprises, and utterly void of emotion or imagination. And his apartment and office really express that. His apartment looks more like a demo room in IKEA than a place a person would actually live. It’s sterile and lacking character. Much like Harold. And you can contrast that with his love interest, Ana. Her bakery and home are filled with personality. Lots of random art and clashing decorations that kind of bring about a certain amount of delirium in her presence, which her character cultivates. She’s the exact opposite of Harold, impulsive and emotional, and her surroundings show that. Similarly, Professor Hilbert’s office is fantastic. It’s overflowing with books. Nothing looks organized in the slightest, just as scattered and discombobulated as his mind probably is. But it looks exactly like you would expect it should. This is a man that loves and obsesses over literature, and of course his office would be a sort of alter to the things he loves. His true passions really play out in his office. This could be contrasted with Karen Eiffel’s apartment. It’s completely void of anything. It’s basically a series of utterly white walls, with minimalist design to everything. For a character whose supposed to be a great creative mind, this set would seem rather odd. But then you learn that she’s in a state of writers block, and I believe the set is meant to reflect that. She can’t be imaginative, so the world around her is becoming as blank as the sheets in her typewriter, she’s becoming more like Harold Crick. 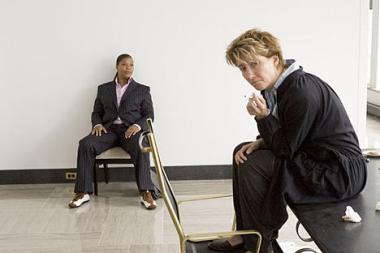 As a closing remark, I really find the interactions between Eiffel and Crick to be tremendous. This is essentially a creator meeting her creation. And the creation gets to ask the creator what they were thinking. It’s almost as if a human could meet God and ask why things are the way they are. I think this is a very fascinating and kind of disturbing idea, especially for someone who creates characters. If these people are really real, what would they say to you? Do you treat them the way they’re supposed to be?

All in all, this movie is amazing. Well acted, well written, and well directed. The music is amazing as well, predominantly relying on music from indie band Spoon. And I think it’s the casting that really makes this movie for me. Every character is spot on perfectly cast. Even though it’s a little weird to see those guys from the Sonic commercials as IRS workers…

Stranger Than Fiction  was directed by Marc Foster, written by Zach Helm, and distributed by Columbia Pictures.

Tagged as: Reel Talk, Stranger Than Fiction, Will Farrel