Over the last few years, I’ve been getting into Westerns. I know I watched a lot of the classic ones with my dad or grandpa back when I was a kid, but for most of my life, Westerns were an antiquated genre that weren’t exactly holding up. But recently, I’ve been rediscovering several of the old classics like the Searchers, the Magnificent Seven, and the Good, the Bad, and the Ugly while diving into the great modern Westerns like the remakes of 3:10 to Yuma and True Grit, and No Country for Old Men (I contend that it counts). And I just watched a great addition to the neo-Western genre. 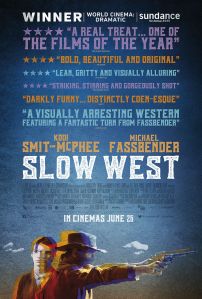 Slow West is a United Kingdom/New Zealand co-production that was released recently, and it’s very unique. While I’ve seen plenty of the Italian-made Spaghetti Westerns, this is the first one that I’ve ever heard of that’s been made in New Zealand. It was even filmed there, and while I’m a native of Colorado and the scenery didn’t exactly convince me of thinking it was my home state, it was shockingly close. No one in the principle cast was American, which is certainly nothing new for the Western genre, but what’s rare is that most of them aren’t supposed to be American. Where the remake of 3:10 for Yuma had the New Zealand Russell Crowe and English Christian Bale as the principle actors, they were playing Americans. Slow West ends up being a Western all about immigrants. People who have either fled their home country, or at least head out to the West in hopes of better things. And I’m shocked that I’ve never seen a Western with this sort of premise before. It’s obvious in retrospect, of course there should be more movies about immigrants struggling to make it in the American west. A lot of the classic Westerns will have the stereotypical Irish immigrant, but I’ve never seen a movie quite like this.

The movie starts Kodi Smit-McPhee as Jay Cavendish, a wealthy Irish boy whose traveling through Colorado to find Rose Ross, the love of his life, who had to flee Ireland with her father. As the movie progresses we learn that the reason that Rose and her father had to flee was because Rose’s father John accidentally killed Jay’s rich father. We can also plainly see from the flashbacks that Rose doesn’t love Jay, and sees him as a little brother, something poor Jay never understands. From the first scene, the awkward and naive Jay meets Silas, a moral-less bounty hunter played by the amazing Michael Fassbender. Silas agrees to help Jay find Rose in exchange for pretty much all of his money. We later find out that there’s a serious bounty on Rose and John, and that Silas knows Jay’s leading him to them.

Most of the movie is just Jay and Silas making their way through the angry, inhospitable west, meeting fellow immigrants and peeking into their lives. They meet some older African men who are singling in French, and they talk to Jay about love being the only universal language. They run into a family attempting to rob a local trading post, who I believe were supposed to be Dutch. That was a particularly heartbreaking scene, featuring both Jay’s first kill in self-defense, and the realization that they had two kids waiting out side, now orphans. After Jay decides that Silas is too boorish, he flees on his own, and runs into Werner, a German doctor researching the native tribes. They have a lovely night, discussing intellectual matters, much to Jay’s delight, but when he wakes up, he finds Werner has stolen everything of Jay’s leaving him to die in the wasteland. But Silas comes back to save him.

As the movie wares on, the relationship between Jay and Silas begins to take a paternal twist. Silas starts to grow fond of Jay as they discus the moral implications of Silas’ life as a bounty hunter. They also meet a fellow band of mercenaries who are also on the path of the Ross’ and who have apparently taken in the Dutch children. After getting Silas and Jay drunk on Absinthe, the leader of the mercenaries, Payne, learns that Jay knows where the Ross’ are, and it becomes a race to get to them first. Silas finally has a change of heart, and tells Jay all about the bounty on the Ross’ and decides to help Jay save them.

We then get the third act, which is an action set piece where the Ross’ small house is attacked by all the various groups who want to get the bounty of the Ross family. Payne’s gang, a bounty hunter who pretends to be a priest, and Jay and Silas all try to reach the Ross’. John Ross is killed by the priest, and Rose barricades herself in the house along with a visiting Native American man. Eventually Silas is shot, and pretty much everyone is killed. Jay barges into the house, and is shot by Rose, not even realizing who he was for a few moments. There’s a particularly slapstick moment when the bleeding Jay literally has salt poured in his wound after seeing Rose kiss the Native American man. The movie ends on an oddly hopeful note, with Jay dead, but Silas living a life with Rose and the two Dutch children, apparently ready to live a straight life.

Slow West is a strange but very enjoyable movie that I highly recommend. It had a lot of heart and a suprising amount of humor.